The Myth of the Mountain Lion 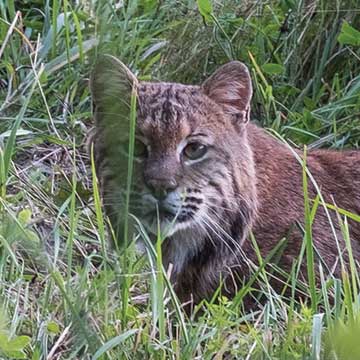 Consider the cat. From stem to stern, it is a marvel of biological design. Each individual organ in its body serves a function that contributes to the survival of the whole in such an orchestrated way that it is hard not to conclude that there is a divine hand at work in its creation.

The cats of literature

The wonder of its perfection compelled the eighteenth-century poet Christopher Smart to compose large sections of his epic, Jubilate Agno, as a paean to his cat, Jeoffry.

For God has blessed him in the
variety of his movements.
For, tho he cannot fly, he is an
excellent clamberer.
For his motions upon the face of
the earth are more than any other
quadruped.
For he can tread to all the measures
upon the music.
For he can swim for life.
For he can creep.

Jeoffrey was a domesticated house cat, but in their most exalted, wild forms, cats perform all of these tasks and more with a terrible cognizance that caused William Blake, to wonder about a tiger, “What immortal hand or eye / Could frame thy fearful symmetry?”

Cat studies in literature abound (see Hemingway, T.S. Eliot, et al.), perhaps because of their elusive and fickle character, which makes for both good drama and the stuff of urban legend in our area. Undomesticated cats are thrilling sights whenever one spots one, and I can recall with perfect clarity the three times I have seen one around here. Twice in Sharon and once in Kent, CT, they emerge like apparitions, wild and stealthy, and usually slip back into the forest like mist.

My best view of one was through the kitchen window of my friend’s home in Sharon, before which the bobcat conducted a veritable parade by their standards of privacy. Although its movements were like those of a house cat, its flared beard and lack of a tail suggested a wildness about it in the way that you can just tell with some humans: “that guy has been in a bar fight.”

Its eyes have just the right slant that car companies replicate in the headlights of their cars to suggest aggressiveness. Whether considered piecemeal from behind plate glass or instantaneously when one is lucky enough to stumble upon one on a trail, the wonder of this creature is that one immediately knows not to mess with it.

Fortunately, bobcats don’t really want any part of humans, either. Leave them to their hunting and they will never look to engage with anything larger than a deer, and that only when food is scarce and starvation looming.

Their diet is primarily rabbits, birds, rodents, and the occasional fish, with some other animals mixed in as opportunity presents itself. For that reason, I always keep an eye on stone walls and the margins of fields, where rabbits and mice burrow, in hopes that a bobcat might be on the prowl.

A couple of other witnesses were in the room when I spotted that felicitous feline promenading through the grass, so I could confirm the sighting. Only a foot or two in height and weighing somewhere in the neighborhood of twelve pounds, there was no question that this was a bobcat and not a house cat. It certainly wasn’t a mountain lion.

Or was it a mountain lion?

Yet, in talking with some people in the area, there are some devoted naturalists who will swear on their mother’s grave that they have seen mountain lions in our area, despite all scientific evidence to the contrary.

Mountain lions (variously called cougars, pumas, panthers, or catamounts) are much larger than bobcats and are consequently categorized in the Puma genus rather than the smaller Lynx assignment that contains bobcats and lynxes. They stand about three feet, but males can weigh over 200 pounds, and in contrast to a bobcat, can stretch to about seven feet in length, including a long tail that is absent on the smaller animal. As a consequence of their size, their diet includes larger mammals, and in the west they are frequently blamed for attacking livestock, leading to their hunting (and overhunting) by ranchers.

Where best to find mountain lions

It makes sense that cougars would prowl the midwest, where larger game is the norm, their single-color fur blends into desert backdrops, and populations are sometimes in need of an apex predator to keep numbers in check. Puma concolor contains six subspecies (mostly in South America), and the North American one is distinguished by region, although their native range is almost exclusively in and to the west of the Rocky Mountains, with the exception of the Florida Panther.

Those two habitats, however, reflect the incredible adaptability of this creature. Equally at home in the mountains and in swamps, it can thrive wherever there is ample food, which could be just about anywhere in the Americas. Its range covers 110 degrees of latitude, from British Columbia to the southernmost Andes, and while it has been largely extirpated from the eastern United States by hunters, occasional sightings have been confirmed. Mountain lion scat has been scientifically verified in Vermont, New Hampshire, and Maine over the past few decades, but these artifacts have been attributed to cougars that were released animals or pets. Evidence of their existence has never been persistent or common enough to suggest a resident population.

In the age of ubiquitous cameras, physical evidence is the only real way to determine the presence of mountain lions in New England. Residents have submitted scores of blurry photographs to environmental authorities, and all but a few are deemed hoaxes or misidentified animals such as Great Danes or bobcats. When an animal leaves scat or hair, however, the evidence can be tested to match DNA with known subspecies. Most confirmed cougar sightings are of formerly captive animals with links to South America, where they were captured and illegally sold.

But then there is the St. Croix Cougar. In 2011, a driver on the Merritt Parkway in Milford, CT, struck and killed a young male, the first confirmed existence of a mountain lion in the state in over 100 years. An autopsy and DNA tests not only identified the biology of the animal but linked it to the DNA of a native population of cats in the Dakotas, over 1600 miles away. Mountain lions typically disperse over an area of several hundred miles, and none had ever been known to range more than six hundred miles from their home. This creature had roamed farther than any other known cougar, but why?

Cougars disperse in search of food and mates, and Department of Environmental Protection (DEP) scientists concluded that mating was the most likely reason for this animal’s migration. In the months following its death, they traced its genetic and literal footprints back through New York and the north-central United States and Ontario to its first documented appearance near St. Croix, WI. In search of a resident population, the animal extended its range for months, subsisting on porcupine and other native species until it reached Connecticut.

The need for apex predators

According to the state DEP, “[it] is unlikely that New England will soon witness another long distance disperser,” but all the same, some naturalists are optimistic. Susan Morse, founder and science director of Keeping Track, is convinced of their eventual return and even their necessity – along with wolves – as apex predators that will control the deer population in New England.

Their versatility and dispersal throughout the Mississippi corridor support her belief, and while that would present some challenges for human-cougar interactions, she believes, “it would be the best thing for our forests.”

More than just a biological factor, however, mountain lions hold an important place in our culture and mythology. Donald Schueler put it best in his book, Incident at Eagle Ranch, “[the] mountain lion works a strong magic in the imagination of many Americans. It is the ultimate loner, a renegade presence in the wildest canyons and wildest mountains, the sign of everything that is remote from us, everything we have not spoiled.”

With any luck, we’ll get a second chance with cougars in New England. Let’s try not to spoil it.