The old church, which had first opened its doors to parishioners in 1892, closed those same doors in 1955. It would subsequently stand empty and unused for the next 30 years. “In 1979 the Methodist Church in Copake Falls, NY, was an abandoned and bedraggled building, windows broken, the door often left standing open, the front step littered with broken glass. Only the care of neighbors kept it from being overgrown and ruined.” (The Roe Jan Independent, Pg. 28B, July 3, 1985). 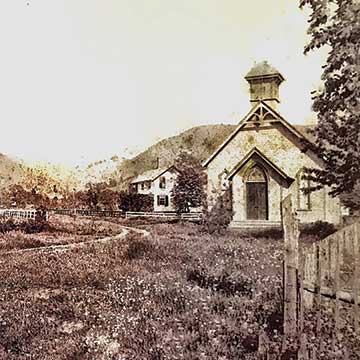 Long-time neighbors from Copake Falls recall the indignities suffered by the building during the 30 years it stood empty. But, as life-long neighbor, Richard Barton recalled, “In spite of everything, the old building was remarkably sound, mostly needing a paint job, basic repairs, and a new roof.” Copake town supervisor, Alfred Near, an early advocate for saving the former church building said, “It was always my desire that the historical society should have a home for the things given to them,” and suggested that the restored building be used to “establish a little museum.” (The Roe Jan Independent, November 18, 1982).

By 1981, the little church had begun to rise from the metaphorical ashes like a phoenix, and thanks to the vision and persistence of Supervisor Near, the local community and members of the Roeliff Jansen Historical Society (RJHS), the building was purchased by the town of Copake, restored, and in 1985 became an inspiring example of adaptive reuse, housing the Roe Jan Historical Society Museum.

But before the building opened its doors once again, a committee, appointed by the Town board, oversaw an extensive restoration. The Hillsdale-Copake Garden Club began a program of plantings on the property, and inmates from the Hudson Correctional facility were brought in to paint the building inside and out. Copake Falls resident and current RJHS board member Mibs Zelley recalls how surprised these inmates were to find the structure’s rear wall oozing with a viscus substance left by generations of honeybees.

Echoes of the past

The fact is that the restored church building, situated on what is still called Miles Road, formerly Mile’s Grove, and recently adorned by a new Pomeroy Historic Marker, harkens back to the town’s early origins and the industrial heart of the area, when the town itself was simply called Copake Iron Works.

This part of Columbia County was once part of the vast Livingston Manor, which became several separate towns, including Copake, in 1824. Early on, two major figures greatly influenced the area’s industrial and economic development: Lemuel Pomeroy, who started the Copake Iron Works in 1845 exploiting the local iron ore, and Frederick Miles, who improved and expanded the works following the Civil War. Perhaps best known as producer of particularly sharp and durable ‘Chilled Plows’ and other agricultural tools, the Iron Works continued into the early 20th century. The New York and Harlem Railroad, with a prominent stop in Copake Falls, brought more prosperity and a larger work force to the area. These workers and their families, of different nationalities and faiths, all needed places to live and places to worship.

By the 1890s the tiny hamlet had no less than three wooden Gothic Revival churches, serving three different faiths. The first was exceptionally fine Gothic structure of St. John in the Wilderness (1851) thought to have been personally designed by Richard Upjohn, noted architect of Trinity Church on Wall Street in lower Manhattan. Built on a steep rise overlooking the hamlet, this church was funded by Pomeroy family, owners of the Iron Works, for use by the more privileged members of the community. It is still an active Episcopal church, hosting musical programs, events and exhibits in the recently established Burke Hall Art Gallery.

When Irish immigrants fleeing the Great Potato Famine arrived in New York City they were greeted with “Irish need not apply.” As early as 1845, when the Copake Iron Works was founded, Lemuel Pomeroy, needing laborers of all kinds, hired many Irish workers who settled in the immediate area. In 1867, the Irish community built a Gothic Style Catholic Church, named for St. Bridget of Kildare, fittingly enough the Patron Saint of blacksmiths and travelers. In 1959, when the concept of adaptive reuse was still relatively unknown and new was always better, St. Bridget’s of Copake was closed, ultimately demolished and replaced by a modern church called Our Lady of Hope Catholic Church, which still thrives on route 22 near Copake Falls.

Though flourishing today, back in 1887 the Episcopal parish of St. John in the Wilderness had greatly decreased, and during the next ten years services became rare and sporadic. During the downturn of that parish’s activity, the otherwise empty building was sometimes used for services by local Methodists who as yet had no church of their own. This practice apparently infuriated members of the original congregation. In retaliation, Fanny Pomeroy Chesbrough Peck and a small number of fellow Episcopalians actually locked themselves in the church to prevent it from being further used by the Methodists.

The dramatic actions of Peck and the others ignited a growing interest in the Methodist cause in Copake Falls, and led to the circulation of a subscription list to fund a construction campaign for a new house of worship. A 1906 issue of the Copake Church Messenger,  refers to “strenuous efforts exerted, which resulted in the erection of a fine edifice on an excellent site.”

An indenture dated November 28, 1891 between Frederick Miles, then owner of the Iron Works, and the Methodist Episcopal Church, deeded the land on which the new building was erected to the group, in consideration of the sum of one dollar. The new church, built between 1891 and 1892 at the cost of about $2,000, was described around the time of its completion as “neat and comfortable and sufficiently commodious.” (Our Building, RJHS Website, www.roeliffjansenhs.org). Like both St. John in the Wilderness and St. Bridget’s, it was built in the “Carpenter Gothic” style, with tall lancet windows, soaring belfry tower, clad in what’s commonly known as “novelty siding.” The doors of the church remained open for the next 63 years.

A gift to the present

Reflecting, as it does, so much local history, the former church has become the repository of objects, documents, books, and memories. Visitors love to share stories about the building itself, and a few sometimes sheepishly admit to having been among those who threw stones at the windows.

Each year, the Historical Society hosts a rich variety of public programs. But, these days, lecturers speak from the former church pulpit to audiences seated in the original wooden pews. During Winter Walk in December the building is decked out in wreaths and lights, and the community still gathers throughout the hamlet on Copake Falls day each August. In the summer months, the “sufficiently commodious” interior becomes an exhibition space, featuring installations revolving around nearly two centuries of Roe Jan area history. Postponed one year due to the pandemic, the exhibition now planned for the summer of 2021 will be Revived in Wood: Greek and Gothic Revival, celebrating the nearly 20 surviving wooden churches of the Roe Jan region, of which the Old Copake Falls Church is one.

What better place for such an exhibit than a building that was so effectively rescued, restored, and adaptively reused? And how fitting that this particular building, once the spiritual and social center of its community, continues to play a central role in the present community – as a place for discovering, sharing, and celebrating the rich and varied history of the area.