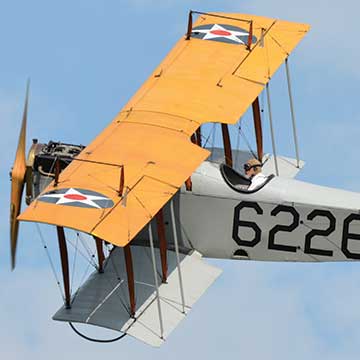 The history of brave men and women in their magical flying machines are lovingly preserved at the Old Rhinebeck Aerodrome Museum. But this is not your static, hands-off museum. No, these winged machines, some dating back to the earliest days of flight, take to the air summer through fall in air shows that delight young and old alike.

Cole Palen, the founder of the Aerodrome

According to the organization’s website, the Aerodrome has been entertaining and educating for more than 50 years. Its founder, Cole Palen, grew up next to a 1930s Hudson Valley airport, dreaming that he would own and fly the machines he saw overhead. He spent the rest of his life bringing the vision alive. Starting with six derelict World War I planes, Palen would eventually make the Aerodrome into America’s first flying museum of antique aircraft and replicas, achieving worldwide fame.

Palen believed, “It isn’t an airplane if it doesn’t fly,” and the non-profit Rhinebeck Aerodrome Museum continues his work of collecting, restoring, and exhibiting more than 60 aircraft of the Pioneer, World War I and Lindbergh Ages of aviation. Palen believed in having fun and presenting his treasures in an accessible way, and that tradition continues.

Michael Fisher has been involved with the Museum for a number of years, originally and now once again as an announcer at some of the events the Aerodrome conducts, and as its secretary. The former pilot said, “We have an amazing number of folks who have been here a long time. We used to get several thousand people for air shows back in the 1970s, which was really our heyday, but the first gas crises put a crimp on things. But, we are making a recovery and a good crowd will be between 500 to 1,000 for a show.” Not as grand as the 8,000 to 10,000 people who might show up after the Aerodrome and Museum made an appearance in National Geographic Magazine, but still a sizeable crowd. “We have picked up some momentum recently after a TripAdvisor named us a ‘don’t miss treasure’ and included it on its bucket list of things to do.”

The stars of the show

The 2017 season will run June 10 to October 22. Shows start at 2pm and run until about 4pm. The stars are the historic airplanes, including a 1909 Bleriot, the oldest regularly flying airplane in the Western Hemisphere; a Fokker DR-I Triplane, the most famous fighter of World War I; and a precise replica of the Spirit of St. Louis, which was the first aircraft to fly from New York to Paris in 1927. While aircraft rotate on and off the flight line, usually 15 to 20 are flyable for shows.

You can fly, too!

And, not only can spectators enjoy the aerial shows, they can also get up and into the wild blue yonder. The Museum, for a fee, will fly passengers in its 1929 New Standard D-25 that was designed for passenger hopping by the great “flying circuses” of the 1920s and 1930s. Maintained to modern aircraft regulations, the plane is now a fixture of the mid-Hudson Valley summer skies, carrying up to four passengers per flight before and after the weekend air shows, as well as on weekdays. Flights are approximately 15 minutes long, cost $75 per person, are on a first-come-first-serve-basis. The rides begin at 10am and continue to dusk. Weekday rides are obtained by reservation and depend on pilot availability.

“Again, our motto is we entertain and educate,” said Fisher. “We are chartered by the state of New York as a museum and that is our mission. And at the bottom of it all is the preservation of aircraft and memorabilia, and to capture the various eras of flight.”

Various planes are featured in the Aerodrome display and its shows, such as the Curtiss Jenny, which was mistakenly printed upside down on a few airmail stamps in 1918, making it one of the rarer stamps that can fetch tens of thousands of dollars for a lucky owner; a Glenn Curtis Albany Flyer that flew from Albany to New York City in 1920, then considered a rather dangerous feat because of shifting winds along the route; and the above-mentioned Spirit of St. Louis replica that flew last year and attracted a huge crowd.

A Saturday “History of Flight” program highlights the Pioneer era before World War I, a World War I show teaser, and the Golden Age of Aviation in the 20s and 30s. A Sunday show is a World War I spectacular with a hero, a heroine, the villainous Black Baron of Rhinebeck, scenery, pyrotechnics, and a World War I tank. The supporting cast includes many antique automobiles.

The folks behind the museum

The president of the Museum is Michael DiGiacomio, who, during his younger years spent hours building model aircraft and volunteering work on full-scale aircraft at Stanton Airport, and now operates Mike’s Tree Service in Dutchess County. He has actively been volunteering since 2001, starting with cutting grass and then helping with air shows. He has been a member of the Museum Board of Trustees since 2007.

Clay Hammond serves as Vice President and, perhaps more importantly, as Chief Pilot at the Museum. He took his first airplane ride when he was just five-weeks old on his mom’s lap in the family J-3 Cub, flying out of Old Rhinebeck. He began flying vintage aircraft at an early age. A professional pilot and aviation salesman by trade, he has specialized in aircraft sales, ferry and delivery of aircraft new and old.

The Museum, which is worth a visit in and of itself, opens on May 1. It contains a wondrous collection of airplanes in addition to the ones mentioned above. Events during the month of May include the Second Annual Spirit Gala and Fundraiser on May 20th, which will include a daytime demonstration and educational discussions followed by an evening fundraiser, dinner and dancing at the Aerodrome, and the 13th Annual Cole and Rita Palen Memorial Free Flight Meet on May 28. •

For more information and to see a list of events, visit www.oldrhinebeck.org.