Although the house is listed in the Historic Hillsdale Resource Survey as being in the Federal style, it does not exhibit strong Federal characteristics. David Gallager, a local decorative arts expert and amateur architectural historian, considers the house to be a classic example of the Georgian style, noting “The Palladian windows are typical Georgian features, seen in many Columbia County grand homes such as the Ludlow house in Claverack, 1786, and other houses including frame examples.” 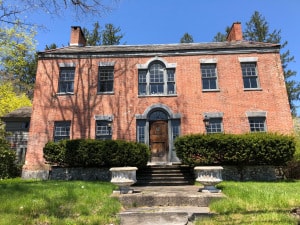 Revolutionary War. At some point, either before or just after the Revolutionary War, he made his way to Hillsdale when the town was still commonly known as Nobletown in the disputed border lands between Massachusetts and New York. He purchased land in Hillsdale Village from the Van Rensselaers after Massachusetts yielded to New York all claims for the contested land. Foster built the house as both a family residence and inn, and it served as a coach stop along the Columbia Turnpike (1799). Its barred basement was sometimes used to quarter prisoners on their way to the county jail in Claverack. Foster was also a lay preacher: in 1811 he donated land and financed the construction of the Hillsdale’s first Methodist church, which stood just behind the house. The church was lost to fire but its adjacent cemetery is still there, today known alternately as the Pill Hill Cemetery, Methodist Cemetery or the Parla Foster Cemetery. Foster is buried there, as are many of his descendants.

Foster and his wife Phebe Wills, also of CT, had 11 children: Anna, Moses, Isaac, Simeon, Ely, Seymour, Judson, Deidamie, Sally, Katy and Phebe. The property included tenant houses and barns, which can be seen on this map of the Hillsdale Village Historic District, and remained in the Foster family for about 100 years. It passed from Parla to his son Seymour, to Seymour’s son Will. In the 1880s, Will sold the property, then known as Elm Park Farm, to Mr. and Mrs. Asher Adams of Massachusetts. 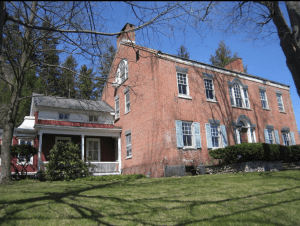 In 1897, the Adams sold the farm to Rensselaer Tenbroeck. Tenbroeck was identified in one newspaper article as a “railroad man.” In fact, he served for more than 20 years as the General Eastern Agent of the Union Pacific Railroad. Students of Capital Region history will recognize both his first and last names and know that Mr. Tenbroeck came from a quite prominent family in New York State. Mr. Tenbroeck remodeled the Foster house. It is likely that he installed the four bathrooms that served the house’s 17 rooms.

Renssalaer Tenbroeck died in 1918. In 1921, his heirs sold the house to Charles and Myrtle Mallory. The Mallorys sold off most of Elm Park Farm, and opened the Elmwood Inn, which was operated by several different owners until 1968. Interestingly, the 1940 census lists Charles as the building superintendent of the Roe Jan school; Myrtle was listed as a “hotel operator.” Myrtle energetically worked many angles to supplement the family income. In the summer of 1932 she rented space to the New York State Police for a trooper station. (The troopers installed a teletype machine to stay in touch with the Albany and Stockport stations.) And in 1942, when real estate salesman Donald Mitchell was looking to expand from his Spencertown office to Hillsdale, Myrtle was soon Mr. Mitchell’s Hillsdale representative, operating out of the inn.

On June 16, 1927 the Mallory’s daughter Marianna Van Rensselaer Mallory was married at the inn. It was a low-key affair, followed by a light 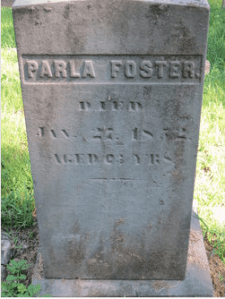 supper at the Wayfarer’s Shop, which had opened in 1924 on Route 23 to serve motorists passing through town.

The Mallorys sold the Elmwood Inn to Mr. and Mrs. Walter Weber of Raleigh, NC in 1947. The Webers operated the inn until selling to William Murphy (exact year unknown). In turn, Mr. Murphy sold it to Mr. and Mrs. Richard Studhalter in 1958.

The Studhalters ran the inn until they sold it to Sara Lehrhaupt in 1963. According to news coverage at the time, Ms. Lehrhaupt had already had a career in hospitality, having owned a large hotel in Asbury Park, NJ. She was also a noted designer of ceramic jewelry and planned to open a studio at the inn and teach classes in ceramic jewelry making. She imagined her primary lodgers would be skiers at Catamount. She also pledged to install four more bathrooms in the house.

Ms. Lehrhaupt also brought another “first” to Hillsdale: its first ever Flea Market. It spanned two weekends in 1965 and attracted more than 50 dealers, who displayed their wares on “the gracious grounds of the Elmwood Inn,” according the a news account. The event was repeated in 1966.

Below are undated photos of the Elmwood Inn 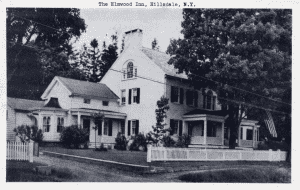 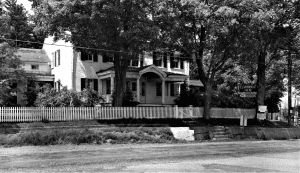 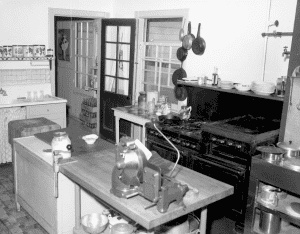 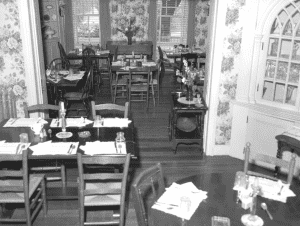 In 1968, Ms. Lehrhaupt sold the building to a restaurateur named Jean Morel, and that was the end of the Elmwood Inn. Monsieur Morel was born in France in 1933, and served in the French army. He emigrated to the US in 1961, eventually settling in a cottage behind the Taconic Wayside Inn in Copake Falls. In the former Elmwood Inn, Chef Morel opened a restaurant called the Dutch Hearth Inn, which operated from 1971 to 1976. Morel then rechristened the restaurant L’Hostellerie Bressane, which he ran until his retirement in 1995. 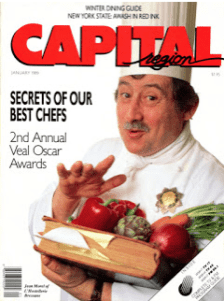 Morel sold the restaurant to Chef David Lawson, who renamed it Aubergine. It closed in 2006. Mr. Lawson sold to property to “Nobletown Corners, Ltd.” That turned out to be the Herrington family. In 2016 Carrie Herrington opened her exquisite interior design store, C. Herrington Home + Design in the old house. 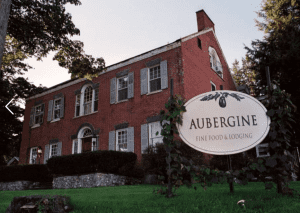 So that’s a quick overview of the 230+ year history of the Parla Foster house. The Historians of Hillsdale have used whatever resources were available to us to research this post. Sadly, due to the coronavirus shutdown, we cannot gain access to the deeds at the county clerk’s office, which could help clear up the house’s ownership during the period from 1947 to 1958. And it would be interesting to know how many acres in Hillsdale Village Parla Foster owned. Some references aver that Foster and Refine Latting, between them, owned most of the property in the hamlet at one time. We know that as late as 1836 Parla donated land for a parsonage “at the corner of South” (now Maple) “and Cold Water Streets,” and that in 1845 Parla’s son Seymour donated the land that the present First Methodist Church is built on.

We welcome any additional information you can provide. Just leave us a comment or email us at hillsdalehistorians@gmail.com.