The Perils of Parsimony, 1881 – A THANKSGIVING STORY

The following cautionary tale was published in the November 24, 1881 issue of the Hillsdale Harbinger.

“The Badgerleys coming here to spend Thanksgiving?” said Mrs. Nettingley. “Not if I know it.”

Mrs. Nettingley was a close-fisted and calculating matron, who lived in a handsome house in a stylish neighborhood in New York and was one of those who, as her maid-of-all-work expressed it, “would skin a flea to save the hide and tallow.” Mrs. Nettingley liked to make a show, but she had a deep-rooted aversion to spending money. And entertaining company on Thanksgiving day was one of the things that could not be accomplished without the latter concomitant.

Mr. Nettingley, a little, weak-minded man, who viewed his big wife with respectful admiration, looked dubiously at her. “But, my dear,” he said, “how are you going to help it? They’ve sent word they are coming.”

“I’ll go to your sister Belinda’s up in Saugatuck County,” she replied.

Mr. Nettingley felt of his chin. “They haven’t invited us,” said he – “That is, not especially.”

“Oh fiddlesticks!” said Mrs. Nettingley. “Belinda’s always glad to see me and the children. And as for staying at home to gorge Mrs. Badgerley and her six children, and Mr. Badgerely’s two sisters, I won’t do it. Why, such a turkey as they would expect would cost three dollars, at the very least. Get me a timetable, Nettingley. Send word to Mrs. Badgerley that I’ve gone away to spend Thanksgiving.” 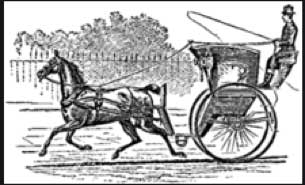 Mr. Nettingley, who never dreamed of opposing his wife’s will in this or any other matter, wrote the letter accordingly and put it in his coat-tail pocket, where it remained. For he forgot all about it. Mrs. Nettingley packed her own things and the things of the four little Nettingleys, and took the afternoon train to Scrag Hollow, in Saugatuck County.

“Mamma,” said Theodora Nettingley – the juvenile scions of the house of Nettingley all had high-sounding appellations – “it looks all shut up and lonely. I don’t believe anyone is at home.”

“Pshaw!” said Mrs. Nettingley. “People in the country always live in the back of the house.”

And carrying a heavy carpet-bag in her hand she trudged around to the rear door, followed by Theodora, Lavinia, Evangeline and Gervase, each lugging a similar bag.

Nobody responded to her repeated volley of knocks, but presently a little old woman, who had come from a neighboring cottage to the well for water, was made to understand what was wanted. “Mrs. Peckfield? Said the little old woman, in a high-pitched, shrill voice, which so often accompanies deafness. “You’re her cousin from the city, come to spend Thanksgiving? Well, if that ain’t too bad! Mrs. Peckfield started this very afternoon for Ladd’s Depot; got some relations as lives there.”

“That’s very strange,” said Mrs. Nettingley. “I telegraphed her that I was coming.”

“Couldn’t a gotten the telegram, I guess,” said the little old woman.

But Mrs. Nettingley knew better than that, for under the corner of the piazza there lay a torn envelope of the Western Union Telegraph! And she knew that Mrs. Peckfield had fled from her, just as she, Mrs. Nettingley, had fled before the Badgerley family.

“But I’ll be even with her!” said Mrs. Nettingley, grinding her false teeth. “I’ll go to Ladd’s Depot. What are the names of her relations there?”

It was a long walk back to the railroad depot, and the four little Nettingley’s were tired and cross, but they fortunately succeeded in reaching it before the last northward train started. But it was an express and didn’t stop at small places like Ladd’s Depot, as Mrs. Nettingley found to her cost when she paid five dollars for a hack to take her back to Ladd’s Depot.

On inquiry, it was found that there were about a half dozen families of the name of Jones at Ladd’s Depot. The first place to which they drove on Thorn Street was a tenement house, where they all had scarlet fever.

The next was a clergyman’s house, where a full-fledged prayer meeting was going briskly on.

“This isn’t the place either,” said poor Mrs. Nettingley, waxing more and more in despair.

And the third was a vinegar-faced old maid, who lived with her married sister and had never heard the name Peckfield in her life.

“What shall I do? Said Mrs. Nettingley

“Better go to a hotel,” said the hackman, who himself was beginning to get out of patience.

“But it costs so much,” said Mrs. Nettingley. And tomorrow is Thanksgiving day. Is there a train back tonight?

“Tonight?” said the hackman. “Why, it’s past eleven already! And my horse has got the epizootic, and I couldn’t keep him out no longer, not for nobody. But I s’pose I could take you to the 12:30 night express for a little extra.”

And this moderate specimen of the tribe of hackmen consented to be satisfied with eight dollars.

“Ma,” whispered Gervase. “Where are we going?”

“Home!” said Mrs. Nettingley, pronouncing the word as if it were a peanut shell she was cracking. There was one comfort though – the Badgerley family would have been repulsed by that time; and, after all, cold beef was cheaper than turkey at thirty cents a pound.

It was one or two o’clock the next day when she reached her own door, having paid in hack and car fare enough to buy half a dozen ten-pound turkeys, and with jaded and fretful children, a violent headache on her own score, and one of her traveling-bags lost.

“I’ll stay home after this,” said Mrs. Nettingley to herself. “Eh? Parlor window-blinds open? People talking! I do believe Nettingley’s got company for Thanksgiving after all!”

And her heart sank down into the soles of her boots. It was quite true. Abby the servant-maid, with red and flurried face, opened the door.

“Where are they?” demanded her mistress.

And Abby threw open the door, thereby disclosing a long table with three huge turkeys well browned and savory, a chicken pie that was a small mountain itself, and a glass reservoir of cranberry sauce, that set Mrs. Nettingley calculating at once as to the probable amount of dollars sunk in its crimson bellows; while seated in hospitable array around the board were Mr. and Mrs. Badgerley, the two sisters, and six children, Mr. and Mrs. Smithers and seven little Smitherses and six Leonards of Maine, second cousins of her husband – twenty-six in all – including her husband.

Mrs. Nettingley and her children sat down and ate their Thanksgiving dinner with what appetite they might.

“My dear,” said the sacrificed lamb, “what was I to do? They didn’t get the letter. They said they had come to spend Thanksgiving and I of course ordered dinner. What else could I do?

“Do?” repeated Mrs. Nettingley in the bitterest of scorn. “Couldn’t you close all the blinds and lock the front door and go down cellar and pretend not to be home? I’ve no patience with you.”

Three days afterward the three youngest Nettingleys broke out with scarlet fever. The seven little Smitherses took it of them – the maid took it to the Smitherses, and Mrs. Nettingley had her winter’s work before her.

“I wish to goodness I had remained at home,” thought Mrs. Nettingey.

And the amount of thankfulness she felt that year was not oppressive, in spite of the Governor’s proclamation. 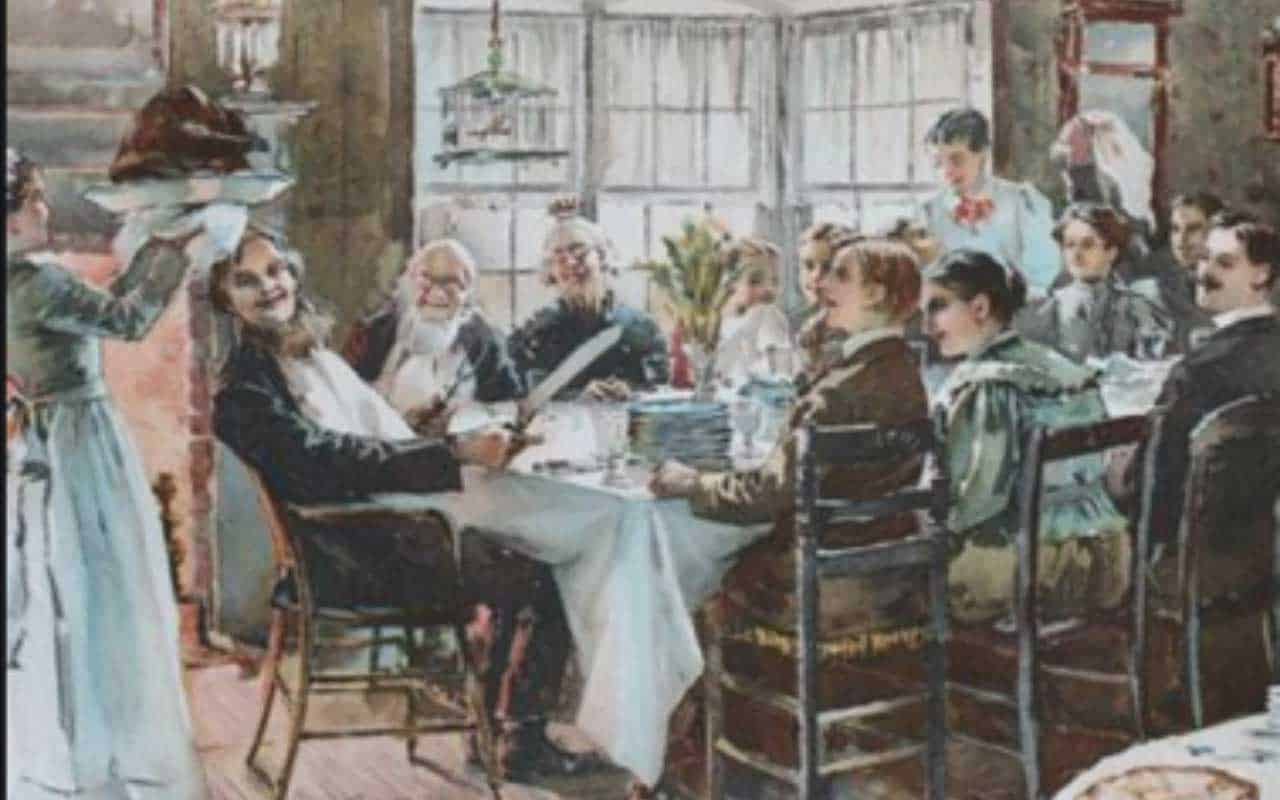