by the Hillsdale Historians

Over the years, there have been a number of prominent women who have had a large and lasting impact on Hillsdale and Columbia County. One of them was Ida Haywood Pulver, a well-educated (for her time) woman whose many professions — photographic hand-colorist, dressmaker-to-the-stars, Parisian milliner, fundraiser, gardener, historical society founder and overall local mover-and-shaker — kept her busy during her extraordinary 101 year life.

Ida Haywood Pulver at home in Hillsdale in her mid-nineties.

Ida Haywood was born in Copake on March 12, 1864. Abraham Lincoln was president and the end of the War of the Rebellion was still almost a year away. Her father, Norman, was the proprietor of the infamous Black Grocery for more than 20 years. Although the Black Grocery had a reputation for attracting “evil scheming men and ladies of easy virtue,” Ida insisted that by the time her father took over the store, it was just like any other country store, with none of the carousing for which it had been known. (This is probably true. Apparently, a lot of the boisterous customers were Irish railroad construction crews who worked bone-crushing jobs all day and wanted a little relaxation at night. But by 1852, the railroad had moved on past Hillsdale on its way to Chatham Four Corners and the wild behavior went along with it.)

Ida attended private school at the Hillsdale Classical Institute (more on that in a future post) and found work with a Hudson photographer of some renown, Frank Forshew. Forshew instructed Ida in the techniques of inspecting photographic plates and, eventually, the art of hand coloring photographs.

Forshew operated a summer shop in Saratoga Springs and for several years, Ida summered with her aunt in Saratoga so that she could continue developing her skills. In June of 1885, Ida accompanied a Forshew employee named Baker to the Mt. McGregor home where Ulysses S. Grant, 18th president of the United States, was staying with his family. Grant, who was dying of throat cancer, wanted a family photograph. Ida recalled how members of the family carried Grant onto the home’s large front porch. Grant was sweating profusely in the summer heat. He died less than a month later. 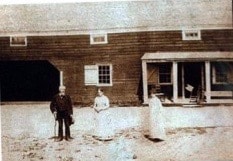 The Black Grocery, likely named for it’s creosote “paint.” There’s no way to know, but this could be a photo of Ida Heywood (right) and her parents.

In 1887, Ida married Dewey Almstead of Copake. Dewey had secured a position at the fashionable St. Denis Hotel in New York City and Dewey and Ida moved to Manhattan. Sadly, Dewey passed away a few years later, when he was in his mid-thirties. To make ends meet, Ida opened a dressmaking shop in her East 48th Street home. She ran the shop for 12 years, eventually employing some eight women, and was said to have had an “A-List” clientele. Along the way, she became an agent for a French millinery company and spent six months living in Paris, learning about French fashion and buying cotton fabrics to bring home.

It’s not clear why, but Ida returned to the Roe Jan area sometime during the first decade of the 20th century. She settled in Hillsdale and in 1917, she became the second wife of Freeland Pulver. Freeland was a very successful merchant and ran a store in what today is the Roe Jan Brewing Company. (Read about Freeland and the brewery here.)

While Freeland toiled away at his shop, Ida soon became one of Hillsdale’s most prominent movers and shakers. She founded and served as the first president of the Hillsdale Garden Club and organized the first of many annual flower shows. (Fans of Downton Abbey will appreciate that, like Violet Crawley, Ida almost always took first prize for her entries.)

Ida also had a passion for local history. In addition to founding the Hillsdale Historical Society, she was a board member of the Daughters of Columbia County Historical Society, later to be known as the Columbia County Historical Society (CCHS). She frequently participated in events and fundraisers to raise money to establish the House of History, in the Vanderpoel House. It’s now owned by the CCHS. Freeland died in 1939, and Ida devoted the rest of her life to gardening and beautifying her home. She also organized chorale recitals and other events to raise money to improve Hillsdale, such as planting trees and shrubs in the park across from the Methodist Church.

The Vanderpoel House in Kinderhook, a/k/a “the House of History.” It is owned by the Columbia County Historical Society.

In 1942, Ida began spending the winter with friends in Delray Beach, FL. In 1954, on her 90th birthday, Ida took her first airplane trip to Florida and then flew many times between New York and Florida until her last trip in 1958.

Ida remained in Hillsdale until 1963, when she moved to Canandaigua, NY to be near her daughter-in-law, Louise Leonard. Ida Pulver passed away in Canandaigua on March 14, 1965, just two days after her 101st birthday. She was active and alert until just a few days before her death. She is buried in the Hillsdale Rural Cemetery.

A postcard showing the St. Denis Hotel at Broadway and 11th Street, New York City, circa 1908.

“The Furness trophy, a luster bowl, went to Mrs. Freeland Pulver for winning the largest number of firsts in home shows for the year.”