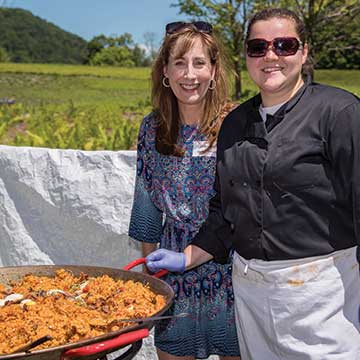 On a rainy afternoon before 52 Main started serving tapas and wine at 4pm, I sat down with Eleanor “El” Nurzia to talk about her career. El explained her history in the restaurant business starting at age 16 and how she decided to open a tapas restaurant in the Village of Millerton seven years ago.

What brought you to Millerton? Why tapas?

I was looking for a location with sophisticated customers near or adjacent to an entertainment venue. I also considered Ridgefield, CT, – both locations have the right demographics for a small plate menu, but Millerton offered a sense of community and the prospect of customer loyalty. In Ridgefield restaurants come and go – hot one day and closed the next.

Tapas were just becoming a familiar way of eating when we opened in 2012. Tapas appeal to the desire for variety and are very affordable. For many older customers one plate and a glass of wine is just the right amount – the perfect portion for light appetites. Others make a full meal of sampling and sharing a selection of tapas. Recently, our most popular choices are the tuna poke tacos, truffled chickpeas, and of course the smoked Gouda mac n’ cheese.

Customers here are very conscious of health and food trends and we try to be very responsive with vegan, vegetarian, keto diet, and gluten-free menu choices. We rotate our menus several times a year to utilize seasonal ingredients and to accommodate seasonal eating habits We always keep the favorites around and we encourage feedback to our chef.

Was it difficult to open in Millerton?

It took us much longer than we ever expected. We had to install a very expensive, custom septic system since Millerton has no sewer. The Department of Health only allowed us a limited portion of the approved seating for the first six months while they conducted additional assessments.

We opened in May 2012 and it wasn’t until September that all of our seats were finally released. It was only then that we could properly advertise and begin taking reservations. It was a bumpy opening and it took four years to get to where we should have been in two years.

Initially underage drinkers were a problem. They were accustomed to not being carded in Millerton and it took a while to make it clear that we would not be serving minors here. It also took time to establish our behavioral expectations. Some younger guests saw a large bar and thought it gave license to poor behavior. We are very hardcore about that and customers also need to be appropriately dressed – see that “Proper Attire” sign? Seven years later, we enjoy a lovely adult crowd. We have become a community gathering spot.

How did you get started in the restaurant business?

I grew up in an extended Italian family and feeding large groups of people became a natural skill. At age 16 I started out waitressing weekends and in summers for a caterer at a local country club in Mahopac in Putnam County. When I went to Boston College on an academic scholarship I needed to work and got jobs tending bar downtown during the school year. At BC my major was economics. And I studied international relations and economics in an American University study abroad program in Belgium. I made many friends during this program and eventually moved to Washington DC after graduation.

My first official restaurant management position was with Capital Management Group, which owned eight restaurants and expanded to 18 in the DC area during the time I worked for them. Each restaurant had a different concept and menu, and I worked in several of them in different positions. I was involved in several openings and eventually focused on developing corporate employee training. Every task needs to be check listed – the restaurant business is all about being super organized because there are so many moving parts.

After eight years I joined Sutton Place Gourmet when they acquired Hayday Markets and I became the general manager of the Hayday Market in Westport, CT. This business was takeout and I missed the social relationship aspect of a sit-down restaurant. After two years there I was recruited to become the regional manager for Coach’s Sports Bar and Grille, a venture based on the reputation of UConn coach Jim Calhoun. It was difficult to work for private investors with little restaurant experience and no clear direction.

Then an opportunity presented itself to help a small restaurant in Pawling owned by family friends. The Colosseo was an Italian mom-and-pop operation that was failing. With the help of my sister-in-law partner we quickly turned the business around and outgrew our space in less than two years. Abruzzi Trattoria on Route 22 in Patterson became our expanded new home. I was part of the creation from the ground up. I owned the business for ten years. It became the local gathering spot that brought the community together.

During this time I created and built 52 Main. With the help of a great team, we transformed the former pharmacy space into a tapas bar. For two hectic years I was at Abruzzi all day and then here in Millerton until late at night. I had not intended to sell Abruzzi, but one of the restaurant’s vendors introduced me to a buyer that made me an offer that I couldn’t refuse.

What don’t most people understand about the restaurant business?

Most people don’t comprehend the complexity of all the interrelated decisions that go into creating a restaurant – from menu planning and pricing, choosing china and glassware to selecting vendors, training staff, maintaining equipment, getting inspected, complying with regulations, hiring help, etc. It’s all about how all of these pieces come together and then stay together.

Have any restaurateurs influenced you?

I don’t watch any cooking TV shows. They have nothing to do with the day-to-day ins and outs of running a restaurant. Lidia Bastianich’s recipes based on the cuisine of northern Italy have influenced me. Also the yearly The Best of the Best recipes from cookbooks published by Food & Wine have a huge variety of recipes. And of course the internet is always a source of new ideas.

Where did you learn to cook?

In my first job at Capital Markets I spent three to four weeks beside the executive chef in each of their restaurants.

Cocktails are super trendy and Jim, our bartender, is very busy. Right now one of our featured drinks, the Paper Plane with Berkshire Mountain bourbon, Amaro Nonino, Aperol and fresh lemon juice, is really popular.

What drives profitability in a restaurant?

Each establishment has a different break-even-number, but to succeed all restaurants need customer foot traffic, and consistency of food and service. The best advertisement is word-of-mouth from customers.

What do you do about negative internet reviews?

Bad reviews are painful. We respond to everyone and try to be polite. It’s very difficult to get rid of a bad review. For example one scathing review was clearly not about our restaurant. We tried to explain to Yelp that we had no burger section on our menu, which the reviewer referred to. We sent Yelp a copy of our menu but they wouldn’t take it down. Because it was from a frequent poster they said there was “insufficient” reason to take it down. Big companies and advertisers get better positioning on Yelp and these sites cannot explain their algorithms. We are finding that there is now more traction with Google reviews and Instagram postings. Monitoring, responding, and posting are so important that I have a social media person to handle this.

What do you do for the NECC’s Chef & Farmers Brunch?

For the fourth year I am the chair of the all-volunteer committee that produces the brunch. All of the money raised from sponsorships, ticket sales, and auctions goes to the NECC. This year it will be held at Millbrook School onSunday, July 28, and we expect over 350 people.

Our committee, supported by NECC staff, organizes everything. This is where checklists are required. First we scout out locations and make a recommendation. Everyone wants the brunch to continue to have a local, rural casual feel. We create sponsorship opportunities and solicit businesses, design and print invitations, sell tables, ask farmers to contribute food, and convince chefs to give up a Sunday morning to feed and serve guests. We rent tents, install sound systems, organize volunteers and valet parking, create the auction, and the least fun, arrange for health inspections, permits, and licenses.

It’s months of work and meetings for a single day, but the brunch is the NECC’s only fundraiser and lets it continue to operate its important programs. I’m so proud to be part of the day.

To learn more about Eleanor Nurzia and her restaurant 52 Main, you can visit them online at www.52main.com or find them on social media.