The Richard B. Fisher Center for the Performing Arts 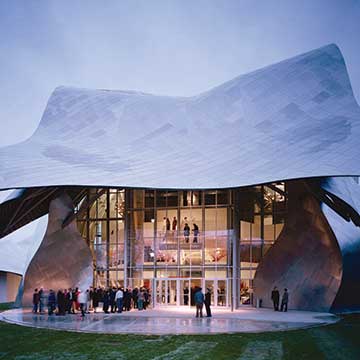 It strikes you as you drive down a entryway at Bard College in Annandale-on-the-Hudson, NY. At first impression, it appears an otherworldly building, perhaps a hobbit dwelling from Lord of the Rings, or maybe a forest cottage from the fairy tale Hansel and Gretel… What is it? It’s the Richard B. Fisher Center for the Performing Arts, built over a four-year period and opened in 2003. Unlike a simple hobbit dwelling or cottage, the Center cost a whopping $62 million to construct and was designed by famed architect Frank Ghery.

Ghery is an 88-year-old Canadian-born American architect who lives in Los Angeles. A number of the buildings he has designed have become world-renowned, and his works are cited as being among the most important of contemporary architecture. Indeed, Vanity Fair called him the “the most important architect of our age.”

When you walk towards the Center you realize the true scope of the building. Quite simply, it is massive. Its highly-sculpted exterior replete with undulating canopies of stainless steel panels that project over the box office and lobby lead to the main space within the Center, the magnificent Sosnoff Theater, site of plays, operas, musical performances, dance, and other productions.
Panels loosely drape over the side of the Theater and create a sky-lit gathering area on either side of the Theater, as well as creating a sculptural collar-like shape that rests on concrete and plaster walls. Brushed stainless steel was chosen for the exterior of the building because of the material’s ability to reflect light and the colors of the sky and surrounding landscape.

“The beauty of the exterior is that it does reflect light at various times of the day, especially at sunset,” said Eleanor Davis, public relations associate at the private liberal arts college founded in 1860, who met me at the Center for a tour of this most impressive building. “Even the green grass is reflected at times and gives it a different hue.”

The interior of the building is equally magical; its open spaces soaring many feet to the ceiling and large windows allowing in ambient light, as well as providing sightlines to the pastoral college campus located only a few miles from the Hudson River. Indeed, the curving and sloping features of the exterior and interior of the building invoke thoughts of water flowing downstream.

We were met by Michael Hofmann, executive assistant at the Center, who joined the informal tour of the interior of the Center. We visited several areas within the Center that included classrooms for students that can also be turned into intimate performance settings. The other main spaces within the Center, which has a total gross area of 107,612 square feet, is the Black Box Theater, or “Theater Two,” that serves as a teaching and training facility accommodating student dance and drama productions. The Theater’s interior is composed of solid and perforated painted plywood panels, and a series of moveable platforms allow for a variety of seating and stage configurations. The Black Box Theater can seat around 225 people.

The main space of the Center is the Sosnoff Theater, which has a high ceiling that creates a large acoustical volume. A heavy wood concert shell surrounds the orchestra stage, projecting sound with impeccable precision. The concert platform can accommodate a large-scale orchestra, and risers for a choir of up to 100 members.

While it is large, the Sosnoff Theater is also intimate, and designed to be so. Interestingly, Yasuhisa Toyota of Nagata Associates collaborated with Ghery on the room acoustics within the Sosnoff Theater. The two men also joined forced on the Walt Disney Concert Hall in Los Angeles. The 64-year-old Toyota has been chief acoustician for over 50 projects worldwide, including the aforementioned Walt Disney Concert Hall, Suntory Hall in Tokyo, the Elbphilhamonie in Hamburg, Germany, and the Kauffman Center for the Performing Arts in Kansas City.

The walls within the Sosnoff Theater are concrete, which is crucial in creating excellent acoustical reflection. A high wood ceiling and overall shape of the Theater also provides acoustical characteristics that make it an ideal setting for all types of performances. Balcony seats bring the audience on the upper levels close to the stage. There is seating for 900 and the Sosnoff Theater draws patrons from New York City, Boston, and beyond to enjoy a variety of programming the college offers, including summer performances.

The seats in the Sosnoff were designed to be supremely comfortable and are adorned with the names of students who attended Bard during construction of the Center but who were unable to participate in its opening. “The students had their daily routines somewhat disturbed by the construction and they graduated before they could enjoy it as students,” said Hofmann. “So, it was thought that placing their names on the seats was a nice tribute to them moving forward.” The seats are made of Douglas fir, as are all the wooden elements of the Sosnoff Theater, and have a somewhat auburn color to them.

Such meticulous attention was given to creating ideal acoustics within the Theater where long, thin, curved sections of wood were placed on both sides of the Theater’s walls to enhance the acoustics. “People always comment on them and they think they are purely decorative,” said Davis, “but they serve a vital function, although they are quite beautiful to look at as well.”
The Center also houses other studios, dressing rooms, conference rooms, offices, rehearsal areas, a scenery shop, and a costume shop. The mechanicals of the Sosnoff Theater are massive, and tall doors allow the moving of large scenery elements into the space.

Ghery said at the time of its opening that the Fisher Center is not a traditional theater building and was not meant to be. “It has a park-like setting. As you approach, you see the building glistening. It’s welcoming. Its scale is user-friendly and inviting. Its façade at the end of a meadow looks out onto an expanse of green that will stay green. Its entry canopy is not a marquee; it’s more like a covered porch, a place for visitors to mingle, to enjoy a sense of community inspired by the performing arts that the building celebrates.”

Toyota offered, “Rarely do we experience a big production like an opera in a relatively small auditorium. This was one of the challenges that this kind of space presented. The space has a big air volume; it’s almost equivalent to that of a bigger-sized symphonic hall. Thus, a big orchestra can sometimes have too much sound energy for a hall of this size; we had to control that energy. We designed the orchestra shell so that its placement is completely flexible, which allows us to achieve the right level of sound control. As a result, a careful balance between the sound of the strings and that of the brass and the percussion can be neatly controlled. We achieve that kind of balance for good sound quality throughout the hall.” •

A visit to the Fisher Center for the Performing Arts is worthwhile, if only to merely view Ghery’s marvelous work. The bonus is taking in the first-rate productions held on a regular basis at the Sosnoff Theater. For more information about upcoming events, visit their website www.fishercenter.bard.edu.