The Second Time Around

Fascinating, individualistic people live here which makes for exceptional second hand, previously owned, vintage, boutique stores each with their own slant on fashion and mix of new and old. You will always find something interesting in these shops or perhaps you have a pair of Gucci shoes or a cocktail dress that needs a new owner. Main Street visited with Connie Griffin on a busy Saturday and ended up buying a new Victoria DiNardo hat and admiring a vintage wedding dress.

Connie Griffin at Griffin at the end of Railroad Street in busy Great Barrington, MA, offers shoppers everything from curated new books, art, and home accents, to new and vintage clothing and items from estate sales. After a career managing a visual special effects and post production company with clients like Sex and the City and The Sopranos, Griffin moved to the Berkshires in 2010 joining her husband Paul Giroux. Connie engages visitors to her store immediately and we talked about long gone Greenwich Village landmarks like Zito’s Bread and the $2.50 bowl of minestrone at the Bleecker Street Luncheonette.

Griffin has a fascinating mix with new and previously owned men’s and women’s clothing lining the wall below new whimsical graphic pillows. “Customers want something that no one else has, is well made and reasonably priced,” according to Connie. And then she showed us the special items behind the counter and in the closet. “Look at this wedding dress with the lace coat to cover arms in the church and this black cocktail dress.”

Your first career was in the film industry. How did that happen?

In college I was an English major and after graduation I moved back to New York and thought I’d like to be in the film industry. I didn’t have the money or the inclination to get a film degree so I started out with a one-day job as a production assistant. PA’s are the people who sweep the floors and get the coffee. That one-day gig turned into a full-time job because the boss believed that an English major could write well and present. From that first job I worked my way up and ended up running a postproduction company.

How did you go from project management to starting a store?

Actually it was my husband’s idea. He found an inexpensive storefront 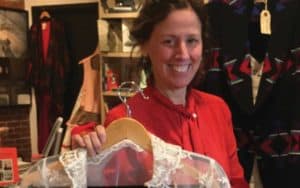 for rent and urged me to start a store nine years ago. I’m still learning every day. When you are the sole proprietor and completely self-funded you have to commit personally, financially, and emotionally. You think about how to make your business better every day, 24 hours a day. You ask yourself, “How can I do this differently?” The transition from working as a special projects manager for the Chamberlain Group to full time at the store took about five years. Railroad Street is our fourth location in nine years. It’s a little smaller, but you know: location, location, location.

Where did you get your vintage education? What does vintage mean to you?

I almost failed kindergarten because my mother would pull me out of school to go to thrift shops with her. She’s 89 now and still shopping every day. That’s how I started looking, really looking at things. The definition of vintage is a moving target. There are some things from the 90s that seem vintage, but generally vintage dates from the 80s and earlier. We just sold a pair of Gucci loafers on Instagram from the 1970s within five minutes of posting. Anything older than 90 years is generally considered an antique. These chemisettes in perfect condition made in France for American stores like Bendel’s are an example of antique clothing.

I’m always looking at estate sales, yard sales, second hand stores, thrift stores, and even dumpsters and free items on the street. Places that aren’t already curated like Brimfield. It’s about honing your eye. There’s always a sense of wonder and discovery. It’s a big treasure hunt and it never gets old. The other day in a thrift shop a charcoal drawing of three kids playing basketball in the late afternoon caught my eye. When I researched the artist I discovered he was a contemporary of Edward Hooper and considered one of the last American realists. It was something of quality that might have ended up in the trash. It’s all about recycling. Everything has a story. There’s a reverence for things cared for and saved. Sometimes people bring things to me. A 90-year-old woman came to the shop with a beautiful winter coat that she wore in the Saint Patrick’s Day parade when she was 18. I make sure to tell buyers the story so they understand the history.

You also have new merchandize. What are your sources?

There are so many creative people that live in the Berkshires. One of the best parts of having a store is deciding in the moment to add something to the mix and see what happens. For example, those large charcoal drawing on the back wall are by a local artist. Griffin has become a venue for his artwork. That stand of Victoria DiNardo hats is another example of merchandise that’s new and high quality. One of my own strengths is being able to identify talent.

All of our new clothing is high quality. There’s an expression ‘future vintage’ that’s overdone, but these new clothes will last a long time. For example we carry the signature wool blankets of the Auntie Oti line, which are handmade in India. Our new clothing walks the line between Great Barrington and Brooklyn. Everything is a little bit different, less traditional and well made. The shirts are made in Guatemala by a Belgian designer and are all hand-woven. We try to find natural fiber clothing, not throw away pieces. I hope that the new will be used and preserved and become vintage one day.

What is your retail philosophy? Do you have an inspiration?

I’m very aware that people can buy things anywhere but when they come here they come to talk and be inspired. They see something unusual that isn’t anywhere else. We try to keep that newness, that unexpected. Coming here is an experience. When I was in second grade my sister and I would go every day after school to George’s Folly, a second hand and junk store in Wellesley, MA. You never knew what you would find there. It’s been my inspiration ever since.

What’s the hard part of running a store?

Just like any other business it’s the nuts and bolts and even harder when it’s your own money.