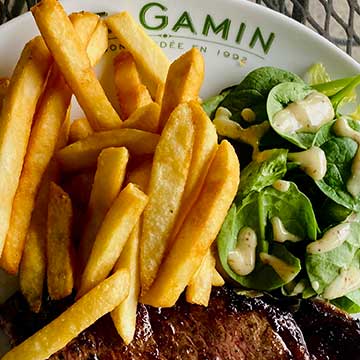 The reviews are in. The critics have spoken. And, the crowds have responded by making their way to Le Gamin, the pleasant French restaurant in Sharon, CT. Robert Arbor … owner and chef at Le Gamin Studio Agraire could not be more pleased. “The customers have been most kind,” he says with a bit of a flourish. “We’re seeing customers we met in New York City 30 years ago make their way in for a café au lait, an afternoon croissant or an anniversary dinner.”

Arbor is no stranger to the creation of successful bistros. The mere fact that his loyal audience follows him across town in New York and into the Litchfield Hills speaks volumes about the fresh, authentic cuisine. Le Gamin is the real deal … and the loyalty confirms it.

Beginning with the first iteration of Le Gamin on MacDougal Street in Soho and progressing through the West Village then, when Manhattan rents became too onerous, across the East River into Brooklyn, eventually ending up in Greenpoint … and in Sharon… the legend that is Le Gamin continues to blossom.

From France to Tahiti to Africa to New York

There were no chefs in Robert’s family. Growing up in the idyllic town of Fontainebleau, France … part of Paris, but protected by acres of royally decreed parks and forests … his mother was a Major in the French Army and his father was both a teacher and a translator. Leaving school, Arbor entered the French military to fulfill his mandatory national service. The world became his classroom as he ended up posted to Tahiti where he learned some of the basic skills of cooking.

Service completed, he ended up spending time in Africa and then Hong Kong where he met Tam, his wife. In 1988, the couple moved to New York where Tam worked in the fashion industry and Robert was challenged to discover his “what’s next.”

The realization that without a diploma or recognized credentials in any professional area made it very difficult to find meaningful work. Robert surveyed his experience, his interests and prospects. “I went to the French Culinary Institute in New York. It was a six-month course that focused on restaurant management as well as the critical aspects of becoming a chef.  If you want to own a restaurant, you must know how to cook.”

The importance of experiences

Certificate in hand and the fire of imagination leading him toward having his own restaurant, Robert began the requisite experience of working for and learning from recognized chefs. One of his mentors, Patrice Boely, encouraged Robert to experience other restaurants, other cuisines. After all, as Robert is quick to point out, “If you learn one menu, one routine, you can’t really grow. I wanted to have as much experience as I could.”

That experience led him, ultimately to an experience that helped crystallize his vision for a restaurant of his own design. He spent a year as executive sous chef in the private corporate dining room perched high atop Chase Manhattan Bank. “Everything was the best. The artwork on the wall, the kitchen details, the table settings, the linen and, of course, the superb quality of the ingredients. It was amazing.”

But, amazing as the experience was, by 1992 it was time … time to do as Henry David Thoreau counseled us all. “If you have built castles in the air, your work need not be lost; that is where they should be. Now put foundations under them.” It was time to create a true French bistro in New York.

And so, it begins…

Le Gamin in Soho was the result of foundations under dream castles, and seemingly as soon as the bistro door was open, the eclectic, arts-oriented population of that neighborhood ventured in to sample Robert Arbor’s cuisine. The names included “A-listers” and emerging stars who lived in the neighborhood and spread the word to their friends that the crêpes, the café au lait and the tartine were superb. And, to add to the magic, they served breakfast!

Like a chess game played out from neighborhood to neighborhood, keeping the commitment to quality and imaginative cooking in the forefront, the Le Gamin legend moved from square to square until Robert and his wife, Tam, were spending time in the Berkshires and found a refuge from the whirlwind of New York. “I kept driving by the empty restaurant in the Sharon Shopping Center because we had purchased the former Beardsley Gardens property.” Robert was hooked. Bringing a true French bistro to Sharon became a focus, then a passion kept in balance by the fact that the Le Gamin Café on Franklin Street in Greenpoint, Brooklyn continues to thrive and demand weekly visits.

The new property in Sharon was going to allow him to begin growing vegetables for his restaurants (the “farm-to-table” concept is something that makes Robert laugh … but Le Gamin sources almost all of its food locally from eggs, chicken and beef from Q Farms, and salad greens from Earth’s Palate Farm). 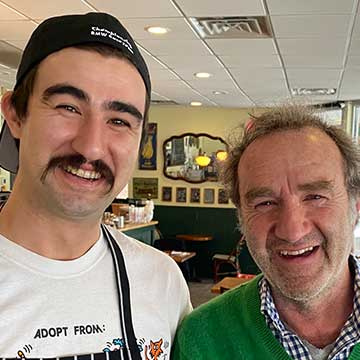 Along the journey, the Arbors had two children and their son, Lucien, affirms the fact that he had spent many hours growing up as part of the emerging Le Gamin story. “During middle and high school, I’d be hanging around the restaurant on the weekends.” With a side trip or two, his direct experience led him to the notion that being a chef/restaurateur might be engaging. With the family’s connections, Lucien went to Paris, worked for a brief time in one of the City of Lights better known restaurants and promptly decamped to Lyons to study in the world famous cooking school created by Paul Bocuse.

Certificate in hand and a driving passion to excel in the family business, Lucien shares duties in the kitchen at Le Gamin in Sharon … managing to balance his keen interests by serving as a “flagger” at Lime Rock Park during races and working on his own roadster with hopes of learning the finer skills of competitive driving.

The fare at Le Gamin consists, as advertised, of elegantly prepared French bistro offerings with daily specials that show the expanse of Robert Arbor’s culinary imagination. Consistently mentioned on “area’s best” lists that cover the Tri-state area of Connecticut, Massachusetts, and Eastern New York, the drive is well worth the result with reservations strongly suggested if weekend dining is planned. As the weather improves, the outdoor seating doubles the capacity of the bistro and makes capturing a table that much easier. Be well prepared to see a scattering of recognizable New York celebrity weekenders at nearby tables, easily slipping back into fondly remembered habits of dining at Le Gamin.

Among the many accomplishments of Robert Arbor during his career is the publishing of a memoir and cookbook which combines a charming telling of his story with some essential recipes that can be attempted … and mastered … at home. Joie De Vivre (Simon and Schuster Paperbacks) celebrates life and offers up “simple French style for everyday living.”

With Robert’s permission, we’re pleased to include a recipe from that book that makes his eyes light up “because it can be used to do so many things.” Here is the recipe for “Complete Soup.”

Cut vegetables into small pieces about the size of the beans. Sweat all the vegetables over a medium fire in butter (or alternatives, above). Add bay leaf, cloves, coriander seeds, and cook until vegetables are transparent. Salt and pepper to taste. Add bacon. Cover with water and bring to a boil. Add pre-soaked beans and turn down to a simmer, cooking until beans are tender (2-3 hours).

For reservations for Le Gamin in Sharon, CT, call (860) 397-5382. The menu is available on their website – legamin.com – making sure you follow the Sharon pages unless Le Gamin Café in Brooklyn is your intended destination.