The True Use of Art: Local Environmentalist Donates Easement to Protect the Beauty of Agriculture

George Inness, one of the world’s most prominent American landscape painters and one who was influenced by the masters of the Hudson River School, once intimated that in order to utilize art in its truest form, the artist must first learn to cultivate his or her own spiritual nature. For Ancramdale, NY, resident and lifelong naturalist Frank Martucci, the communion between the natural world and artistic expression lives on through his activism. In early March of this year Frank, along with his wife Katherine, continued the time-honored tradition of those who feel kinship with the Hudson River Valley by ensuring that their East Heartland Farm located in Ancramdale will be available to support future generations of the town’s agricultural economy. Through the generous donation of a conservation easement on their 171-acre farm to the Dutchess Land Conservancy and the widely renowned environmental activist organization Scenic Hudson, the Martuccis have once again helped a large portion of our historic area sustain its natural beauty. “Frank is a very ardent and passionate lover of nature and art,” says Scenic Hudson president Ned Sullivan. Martucci’s own affinity for artists like Inness and the philosophies of poets like Ralph Waldo Emerson have served as inspiration for his efforts dedicated to land preservation and environmental conservation. Efforts that have led him to become a decades-long champion of the sustainable future of the natural world.

“Emerson believed that the landscape is a missionary,” says Frank. “When we think about what a missionary does, we think about teaching or spreading a message. In this way, I think nature can be a conduit to a greater purpose for humankind.” Frank played a pivotal role in one of Scenic Hudson’s most famous battles against the proposed St. Lawrence Cement (SLC) plant along the Hudson River in 2000. “I remember hearing from members of the St. Lawrence Plant’s initiative that the people of Hudson had actually supported the plant’s construction,” says Frank. “So I decided to visit every establishment from Warren Street down to the river itself in order to ask the members of the community and see for myself what the response actually was.” Frank’s headstrong, on-the-ground advocacy efforts led to a fortuitous meeting with Hudson’s own community-led activism group Friends of Hudson, a group formed by concerned residents specifically for the purpose of raising awareness about the potential plant’s harmful impacts to the local environment. Together, their fervent pursuit of the protection of the historic river was eventually rewarded when St. Lawrence was dealt a fatal blow by then Governor of New York George Pataki and his administration when they rejected the plant’s proposal application in part because it would “mar the natural beauty that has helped ignite a resurgence in the area.” Secretary of State Randy A. Daniels, whose approval was necessary for the plant to obtain permits needed from the Army Corps of Engineers, would go on to rule the project as “inconsistent with the state’s coastal management policies.” Ned Sullivan recalls Frank’s leading contributions saying, “Frank was instrumental in leading the citizens of Eastern Dutchess County as well as the Northwest Corner of Connecticut in an organic movement opposing the plant’s construction. His relentless passion for raising awareness helped bring critical support from influential members of the community including actor Meryl Streep who became an important outspoken member of the citizen coalition.”

For the past two decades, Frank and his wife Katherine have continued to push for the same kind of advocacy that finds itself within the 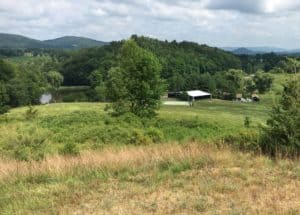 hearts of those who call the Hudson Valley their home. East Heartland farm itself has long been a priority of Scenic Hudson’s Foodshed Conservation Plan, a data-driven blueprint for expanding collaborative farmland-protection efforts to create a secure source of fresh, local food for the Hudson Valley and New York City. The farm is nestled within 3,300 acres of agricultural land in both Dutchess and Columbia Counties that Scenic Hudson, alongside the Dutchess and Columbia Land Conservancies are working together to conserve. Currently, the land is leased to a local grain farmer who grows hay, corn and soybeans. The property is also nearby 2,000 acres of protected lands in Ancram including the Drowned Lands Swamp Conservation Area, Taconic State Park and the Harlem Valley Rail Trail. In addition to its agricultural importance, the land provides an invaluable wildlife habitat for native species. East Heartland Farm lies within the Harlem Valley Significant Biodiversity Area identified by the State’s Hudson River Estuary Program, the Cooperative Fish and Wildlife Research Unit at Cornell University and the New York State Natural Heritage Program. In 2010 and 2011, the Martuccis donated conservation easements on another 372 acres of East Heartland Farm to the Dutchess Land Conservancy, who will hold and maintain the most recently donated easement and will safeguard the productive and scenic land from any future development.

Dutchess Land Conservancy president Becky Thornton says, “Frank and Katherine Martucci are selfless people who so generously give of themselves in so many ways. This is clear in how Frank’s eyes light up each time he talks about his land.” The Martuccis also support visionary affordable housing initiatives in the area and have recently donated land jointly owned with neighbor Dan Slott in order to establish Ancram Rural Build, a program intended to provide affordable housing for families whose occupations, i.e. farmers, support Columbia County’s agricultural economy. As a result, Habitat for Humanity has already constructed two homes on the land. Thornton went on to say, “Frank and Katherine’s strong commitment to ensuring the forever protection of not only their land, but important areas within the surrounding community as well as the broader Hudson Valley truly comes from deep within their hearts. They have played a key role in the preservation of critical land in partnership of critical land in partnership with the Dutchess Land Conservancy and Scenic Hudson, as well as by teaming up with area landowners.”

For Ned Sullivan, Frank’s efforts are more than environmental philanthropy, they are an extension of the man himself, “The conservation of this farm builds upon Frank’s longtime and visionary commitment to protecting the ethereal beauty of the Hudson Valley landscape. He has been both a steward of his land and a leader in protecting the resources of the Hudson Valley for decades.” As a member of Scenic Hudson’s President’s Council of Advisors, Frank has worked side-by-side with Mr.Sullivan for years preserving land and farms as well as creating parks that have connected people with the inspirational power of the Hudson River. Sullivan says, “I have cherished his past role as Scenic Hudson Board member and vice chairman, and the invaluable counsel and support he provides as a member of my President’s Council of Advisors. We’re so grateful that they have so generously ensured that their farm will always support local agriculture, provide invaluable wildlife habitat and help to sustain Ancramdale’s rural charm.”

Like many movements that swell into complex systems of both advocacy and action, Frank’s own environmental revolution stems from a simple human philosophy. “I look at the land as a work of art,” says Frank. “Why would I treat my land any differently by subdividing it for the purpose of development. Ultimately Katherine and I are delighted that our farmland will continue sharing its beauty and productivity with people for generations, and we’re grateful to the Dutchess Land Conservancy and Scenic Hudson for helping us ensure its permanent protection.”

For more information on Scenic Hudson or to get involved visit scenichudson.org

To find out more about both the Dutchess and Columbia Land Conservancies visit dutchessland.org and clctrust.org

Check out Katherine and Frank Martucci’s gifts of George Inness’s work at the Clark Art Institute from June, 2013 below: