Thinking of building a new house? 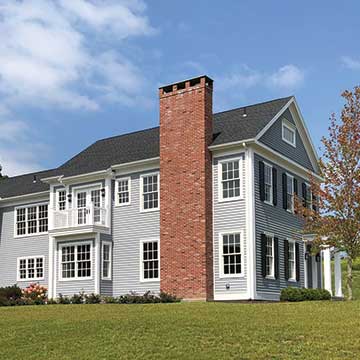 Have you ever thought of a building a brand new house but wondered how much it would cost or how you would even begin? Do you need an architect? Main Street asked area builders, real estate brokers, and proud owners living in a new house built to their specifications about the process, the cost, the timing, and the experience.

The first decision that a new homebuilder must consider is where – the state, the town, and the size of the property. Are schools or convenience to stores or highways important? Are property taxes or income taxes an important consideration? Do you want a view, which often requires a long driveway? Do you need to clear the land? Has the soil been perked for a septic system? Are there restrictions on where you can build or what you can do? How much land and privacy do you want? Building lot costs at a minimum, will be $50,000.

What are construction costs?

For a medium-sized 2,500 to 3,000 square foot house the general consensus of architects and builders is that $250 to $300 a square foot, plus the cost of infrastructure would be a good estimate of cost. This expense can vary enormously depending on the site – bringing in and possibly burying electrical power lines, drilling a well if there’s no municipal water, installing a septic system if there is no sewer – plus the cost of the land itself. Building new is expensive.
Contractor Fridrik Kristjansson of Nailed It Building & Construction supplied some insight into the difficulty of estimating construction costs and the major items that can affect the total.

The big-ticket items that can make or break a budget in terms of the exterior (not even thinking about the driveway, power, septic and any of that ground work), can change the budget by hundreds of thousands of dollars depending on what is used. For example a simple window can be $200 to $300 per piece while more expensive ones can range $2,000 to $3,000 – and up. Vinyl siding is in the neighborhood of 75 cents a square foot while cedar can be $5 to $10 a square foot with exotic woods being even more. An average standing seam metal roof is twice the price of asphalt shingles, and copper is about twice the price of metal.

Interior material choices contribute even more to the cost. Flooring can range anywhere from 50 cents to $5 to $25 a square foot. And some flooring is not finished and needs to be sanded, finished, and stained. Kitchens are a major expense. Fridrik estimates that cheap, all-in-stock Lowes’ kitchen cabinets can cost a couple of thousand dollars compared with custom-made and detailed, which can bring the kitchen price anywhere from $30,000 to $100,000.

Electrical, framing, heating, and plumbing are all roughly priced according to the square foot size of the house. A big house needs more of everything: heating, framing and sheetrock, painting, wiring, plumbing. The more detailed the drawing/sketch of the house that the owner or architect provides and the more things that the homeowner selects will make a cost estimate more accurate. The best thing, Fridrik advises, is to go through the list and create a budget according to the items picked to arrive at an approximate price. Then it’s the owners’ choice to upgrade or subtract from the list. Usually contractors do not include in their cost estimate the expenses of lighting fixtures, appliances, counter tops, faucets, and plumbing fixtures, which range tremendously in price.

Experienced real estate professionals always think of possibly selling a new house in the future – distant or near. “There are features that many buyers look for that you should consider when designing a new home, whether you are building a spec house for immediate resale or a family home for sale down the road,” according to real estate broker Juliet Moore. “The list includes central air conditioning, first floor bedroom with full bath (if possible) as well as first floor social bathroom, fireplace, second floor with en-suite bedrooms, laundry on second floor, an oversized septic system that would permit expansion of the house, mudroom, hardwood floors, wood not vinyl siding, privacy from road, eat-in kitchen, family room and spacious two-bay garage. The builder has included many of these desirable features in a new home for sale on Bunker Hill in Salisbury, CT.”

Pat Best of Best & Cavallaro has built six homes in the area, three for resale and three for personal use. She has never used an architect. “I start by finding plans and photos online of things I like, like HOUZZ or Southern Living, then bring the plans to a draftsman with my wish list: number of bedrooms, bathrooms, square footage, etc. Next I develop a list of specifications of the type of roof, flooring, bath and kitchen finishes, HVAC system, windows, insulation, doors and hardware, etc. for the contractor. I think it is actually easier to sell a newer house if it’s a popular style – like a farmhouse or barn – as long as the finishes appeal to the sophisticated buyer. A new house can often bring a higher price per square foot because the buyer knows they don’t have to worry about anything for quite a while. Because of my own experience I’m not the typical homebuilder and still have been over budget many times. It’s hard to price every single thing accurately and there are unknowns like the cost of a well. My last well was $6,000 over budget since they had to dig deeper and most people, including me, underestimate the site costs including landscaping, walkways, stone walls, and the things that give your house curb appeal and character.”

Two lawyers
Since 1996, weekenders Dan Sternberg and Debbie Cooper had rented locally and became well known to realtors as “tire kickers” as they looked for a home to buy. Gradually they discovered they were attracted to brand new homes, but never found one that was quite right. One day in 2012, the year Dan retired, the couple was biking in Boston Corners, NY and saw a “land for sale” sign. They scrambled up to the top of the hill, took in the view and thought for the first time that maybe they should build. They didn’t bid on the site then but they started talking to architects, and looked at other building sites that were no more than ten miles from the center of the village of Millerton, NY. They were on the verge of purchasing another parcel, when one of the architects they were talking with visited the land in Boston Corners and called Dan: “You’re out of your mind if you don’t build here.” Another hike up the hill made it clear he was right and they acquired the site in February 2013.

The couple’s next big decision was to select local architects who understood their desire for a modern house that respected the physical and cultural landscape. They were impressed with the work of the Lakeville, CT firm Demetriades + Walker that they had seen locally. When Elizabeth Demetriades and Patrick Walker revealed that they shared Debbie and Dan’s admiration for the design qualities of Katsura, the Imperial summer palace in Kyoto, Japan, they knew they had found the right architects.

The next step was “developing the program” to determine what was most important to the couple from the grand theme of integrating the design into the landscape down to the details of closet space. Four weeks later the architects returned with a tiny cardboard model of the house and a simple floor plan to present the basic design. After agreement the architects moved on to the details presenting Dan and Debbie with choices and suggestions for the array of decisions needed to complete the design: everything from the choice of key interior materials to the selection of sinks and toilets. During the summer of 2013, while the architects were working on the final specifications, Dan, with their help, organized and supervised the infrastructure work: surveying the land, bringing electric up the hill to the site, blasting for the foundation, designing a septic system, and creating a curving road up to the house site. By August the plans were complete and detailed bid packages were ready. In another six weeks the bids from contractors were received and United Construction in Torrington, CT was selected. The firm price contract was signed in September 2013 and by April 2015 the house was finished on time and on budget.

Dan described the two years between buying the land and selecting an architect to moving in as, “Two of the happiest years of my life. It was a creative learning experience.” Dan has advice for prospective homebuilders: “Hire an architect, don’t think you can do it yourself. The experience can be fun – take the time to be involved in it.”

Two designers
Henry Smedley and Kathy Chow are New York design professionals who now live full time on Morse Hill Road in the Town of North East, NY. Like Dan and Debbie they started about 13 years ago looking for a fixer upper and discovering that they really wanted a new house. Proximity to New York was also important to them and they drew a two-hour drive circle around Manhattan and began their search. “We first wanted to be along the Hudson River but that turned out to be too expensive or the properties didn’t appeal to us,” remembers Henry. “So we headed due east as we didn’t want to be on the west side of the Hudson until we found a location that we liked with a great view.”

They bought more land than they had expected, established a budget and found their vision changing every month for about a year. They did know what they didn’t want – a stark, white modern aesthetic, but were otherwise uncertain about style, size, or design.

Trained as an architect with 34 years of work experience in the design of interior spaces, Henry knew what he did not know. So the couple hired an architectural firm to work with them on constructing a weatherproof shell. Then they handled most of the interior design and sourcing of materials with the architect’s assistance. Rather than bidding the interior construction they talked to five recommended contractors and then picked the one they liked. Together they developed a creative vision and created a budget based on design drawings. “It is extremely important that you enjoy working with the contractor as the building can take a long time to complete and you will see a lot of each.” The contractor is still their friend.

“We were crazy lucky that we found the perfect spot,” recounted Kathy. After buying the land the couple camped out on the property for three summers before they broke ground on the house, which took another two years to complete. They feel that residing on the site really connected them to the land. Henry’s recommendation to homebuilders is to have patience and don’t rush. “Take your time and really get to know the land well. Determine where the wind comes from, where the great views are at different times of the day and year. Soak in the property. This will probably be one of the most costly things you will do in life so take your time and make sure you get what you really want. Have fun with it.”

The couple never thought that they would live in their “weekend” house full time, but they fell in love with the place and retrofitted their careers to become full-time residents.