In a move that has been nearly a year in the making, Peter Cipkowski officially handed in his formal resignation this week as Hillsdale’s Town Supervisor. Mr.Cipkowski has been part of the Town’s local government since 2005 when he first ran for a position on the Hillsdale Town Board. He first announced his early departure from his position as Town Supervisor in November of last year stating that he would be transitioning to living full-time in California in 2020 to be with his husband. 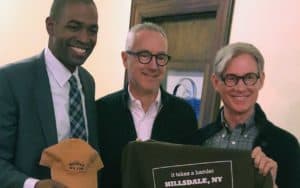 Peter pictured with U.S. Representative Antonio Delgado on his visit to Hillsdale, NY.

“Hillsdale will always be our home,” said Peter. “I have so loved serving on the Town Board for eight years and as Supervisor for the last five years. It has been an honor and a privilege, and together we have accomplished so much.” Under advisement from Brain Quail, Co-Counsel of the New York State Board of Elections, and Ken Dow, a Columbia County Election Commissioner, Section 6-116 of New York State Election Law notes that a resignation should take place before July 31 so that town party committees can nominate a candidate for the November election. There is also a window for independent candidates to circulate nominating petitions and appear on the November ballot.

Cipkowski is credited with helping adopt laws that ultimately helped protect the ridgeline ecosystem in Hillsdale as well as providing property owners with appropriate guidelines. Cipkowski led a movement to adopt a more comprehensive blueprint for the Town’s hamlet in 2010 and that has been credited as  providing a vocabulary to guide growth starting with sidewalks and lamp posts that were installed a couple of years ago. 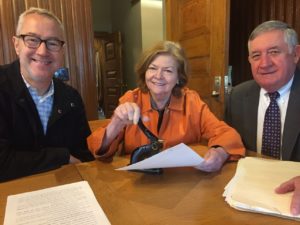 Peter pictured with Town Clerk and Town Attorney at closing for the Town’s Bond Anticipation Note that funded Hillsdale’s sidewalks.

According to the Town’s newsletter, Deputy Supervisor Jill Sims will immediately assume responsibility until the Town Board appoints an Interim Supervisor to serve through the end of this year. The candidate that prevails in the November election will hold the office through December 2023. “I know that many good things lay ahead for Hillsdale,” reflected Mr.Cipkowski in a parting letter in the newsletter. “We look forward to returning to our home in Hillsdale as often as possible.”