Trails to check out before Summer ends.

Three Trails to Explore.
Though the famous bustle of New York City and its vast urban environment has earned its namesake as ¨the greatest city on earth¨ and thus has defined the very identity of the rest of the state for many Americans, traveling up one of the most famous rivers in the country and hiking the vast network of trails the Hudson River Valley has to offer, one may discover what both artists and locals have come to know for generations. The true spirit of what New York has meant to so many for so long lies within its lush and effervescen 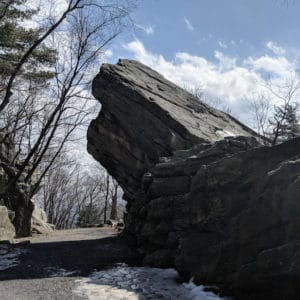 t natural world. Here are three spots to check out before summer ends or for fall leaf peepers.

Mohonk Preserve:
Located along the idyllic Shawangunk Ridge and partially adjoined by the Minnewaska State Park Preserve, Mohonk provides hikers with over 8,000 acres of natural wonders to explore. Much of the preserve is made up of well kept carriage roads dating back to the 19th century that allow the casual hiker near panoramic views of Ulster and Dutchess counties. When wandering down one of the many historic trailways one cannot help but look up at the rocky cliffs that contain networks of caverns and wildlife. It’s also hard to miss the many rock climbers dotting the cliff sides as Mohonk remains one of the most popular destinations for experienced climbers in the area.

Indian Head Wilderness:
One would be remiss when discussing hiking in the Hudson Valley without mention of its most esteemed natural icon, the Catskill Mountain Range. Indeed there is a plethora of options for hikers of all levels of experience when it comes to hiking in the Catskills, but one stands out for both its variety of trails and its utter wildness in character. Indian Head Wilderness wraps its bucolic arms around a number of towns that lay on the eastern escarpment of the Catskill Mountains. This 11,500 acre hiking destination finds its uniqueness within its mountain peaks, hikers are challenged to traverse uneven low level terrain as well as rugged mountain topography in order receive a king’s ransom in the form of awe inspiring views from the peaks of the Plattekill, Indian Head, Twin, Sugarloaf, and Plateau mountains.

Overlook Mountain:
The famous town of Woodstock is known more for its pervasive bohemian culture than the vastness of the natural world that surrounds it. Despite its contributions to music and popular culture, the small hamlet remains a gateway to some of the most sublime vistas around. A short ten minute drive out of town eventually leads to the trailhead at Overlook Mountain. Though well kept, the trail itself is mostly gravel which may make the traditionalist hiker long for the usual earthen footpath. Still, the view at the summit of Mt. Overlook proves an immeasurable reward for those looking to be imbued with a sense of divine connection with nature´s landscape. With relic attractions along the trail like a firetower and the ruins of the Overlook Mountain House the mountain offers a pantheon of things to explore. Hikers should be forewarned however that parts of the trail run nearby a rattlesnake preserve so watch your step.

For a more expansive look at trails around the Hudson Valley, check out “Walking with History” from our May issue. mainstreetmag.com/past-issues/