Unique Local Podcast Offers a Glimpse into The Past

The Aldrich Contemporary Art Museum in Ridgefield, CT, recently announced Hindsight is, a three-episode podcast series created in conjunction with the museum’s exhibition of Twenty Twenty, a group show of drawings in which seven artists respond to the lived experience of this historic year, on view October 12, 2020 to March 14, 2021. The series, created in the radio play genre, includes a range of historical figures from Ridgefield and across Connecticut. Actors from the Piti Theatre Company will give “voice” to these figures while dramatizing social and political issues intensified this year such as voting rights, racism and fascism through their unique perspectives as citizens from the past.

In the October 19 episode, suffragist Alice Paul and Woodrow Wilson will debate women’s right to vote and whether the Equal Rights 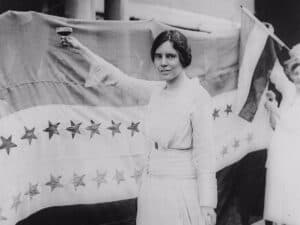 Amendment should have been passed with the clarity afforded by looking back from the year 2020. On October 26, William Webb, an African American Civil War soldier from Connecticut, will meet Ridgefield’s William Webb, who started the Ridgefield Chapter of the NAACP and later became the Connecticut president of the organization. “The Webbs” will discuss civil rights, racism, and the fight for racial justice from their two distinct world views and historical moments. The November 2 episode will recreate Ridgefield High School’s April 1934 mock trial of Adolf Hitler which echoed a similar event organized at Madison Square Garden by the World Jewish Congress a month earlier. This piece, created in collaboration with the Aldrich Teen Fellows, will offer a snapshot of teenage and educational life in Ridgefield in the 1930s and lend itself to questions about how we respond to present issues.

The Hindsight is podcast episodes will be accompanied by two virtual public programs including a talk on October 22 with Tina Cassidy, author of Mr. President, How Long Must We Wait: Alice Paul, Woodrow Wilson, and the Fight for the Right to Vote and Piti Theatre’s Jonathan Mirin. The second program on October 29 is an anti-racism workshop which will take place on October 29 with Kristen Ivey-Colson and Lynn Turner of The AntiRacist Table. The duo will share core principles they have developed to fight racism in the context of themes from the second episode feature the Webbs. The Hindsight is podcast series is produced by the Piti Theatre Company. Based both in Western, MA and Switzerland, their mission is to “create original performances and community-building events that accelerate local transformation towards joy, sustainability, and justice.” In addition to producing the radio plays themselves, Piti has been working with the Aldrich Teen Fellows, the Museum’s teen engagement program, and collaborating with Aldrich educators on developing digital resources for youth and family engagement with the topics from this series.

Podcast episodes will be released weekly on October 19, October 26, and November 2 and will be available to stream for free on the Museum’s website, aldrichart.org

To register for events, visit aldrichart.org/events