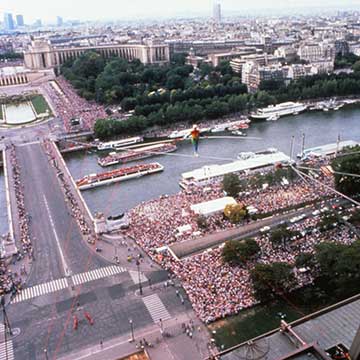 French high-wire artist Philippe Petit speaks so passionately about his desire to learn, that it’s ironic to hear him discuss his experiences as a schoolboy.

“When I was a kid, I was thrown out of several schools because I was caught practicing magic under the desk or stealing my teacher’s watch,” says Petit. Now, at 71 years-old, he continues to devote several hours per day to practicing his art and skills. “It’s an ongoing journey. I’m not giving up,” says Petit.

Renowned for completing 90 appearances on the wire, Petit has performed in spectacular settings around the globe – from France and Australia to the United States, Israel, Switzerland, Belgium, Germany, and beyond.

When he’s not traveling, Petit, who has been referred to as a Renaissance man, resides in the Hudson Valley in a barn he built himself using 18th-century tools and methods. An avid climber, he chose New York’s Hudson Valley location due to its proximity to the Shawangunk Mountains. “This hideaway is a place where I can replenish my batteries between performances,” he adds.

Petit mentions another New York City hideaway. After performing at the Cathedral of Saint John the Divine, he was invited to become an artist-in-residence. “I have secret offices there. It’s such a nest of inspiration.”

Petit is so unique. It makes one wonder what his early life was like. “As a child, I loved to climb everywhere. I’ll let the psychiatrists decide why. Maybe I wanted to escape my time. Maybe I wanted to see the world from another perspective. Who knows and who cares? I was a little climber and nobody – not my parents nor my teachers could stop me,” says Petit.

As a child, his parents enrolled him in a variety of activities. He studied drawing, painting, and carpentry as well as fencing. It was a gift from his grandmother – a magic set – that ignited his love for the art of illusion.

Other early interests included poetry, theater, and juggling. Later, Petit taught himself how to walk on a wire. His motivation? “I think it was an early feeling of rebellion. I learned quickly and it became my life,” he says.

Petit confesses that he often felt alone as a child. Rather than being defeated by this feeling, he believes it was an advantage since it enabled him to focus on problem-solving and teaching himself various art forms.

Attuned to the world around him, Petit drew inspiration from the “invisible teachers” that he noticed everywhere. He discovered that he could learn from the metalsmith workers, welders, and all kinds of craftspeople – just by observing and accepting what they had to teach him.

“Learning is one of the joys of life. There are so many things to learn and it’s a pleasure to do so,” says Petit who always has coins and cards on hand for spontaneous magic tricks. “I like things that are profound. I have no hobbies – just passions. A hobby is something you do on Sundays when you’re bored with life.”

It’s this pursuit of knowledge and skill that motivated Petit to learn to speak six languages and to master many crafts and skills, some which aren’t even legal. When your passion involves pushing boundaries, forbidden things may prove irresistible.

At his home, Petit has a large box of locks. Sometimes he listens to music and explores the art of picking locks. “You’re not supposed to be able to pick a lock. This taps into my love for breaking the rules,” says Petit.

Petit’s unique arsenal of skills was required to carry off “the Coup”–his magnificent 45-minute walk between New York City’s Twin Towers in 1974. Preparation for this feat required intense planning and problem solving. It involved the creation of false identification cards, Petit posing as a journalist, and practicing walking on a swaying wire due to the possibility of strong winds.

A family meadow in France served as a training camp. The Coup took nearly seven years of preparation, rehearsal, and practice. When Petit finally arrived in the US and began scouting out the towers, he injured his foot by stepping on a nail. Once again, rather than being defeated, he relied on the diversion the crutches created. He felt that they hid any suspicion of his plan, which was pulled off artistically –like theater.

Although Petit isn’t inclined to choose favorites, he mentions that some of his walks are particularly dear to him. He describes them as “vivid and brimming with joy.”

While some performances such as his walk between the Twin Towers made international headlines, and inspired the documentary, Man on Wire and feature film, The Walk, others were held in private settings reserved for a select few.

Sometimes Petit receives formal invitations to perform. He recalls the time when Jacques Chirac – the former President of France – was the mayor of Paris. Chirac invited Petit to perform for the Bicentennial of the French Revolution. For that performance, Petit performed his longest walk – approximately 2,100 feet across the Seine River to the Eiffel Tower.

Of course, the energetic artist didn’t always await an invitation. For Petit, these wire walks are a calling. He’s performed many unauthorized walks, which have resulted in arrests. When Petit agreed to do a free performance in Central Park, the NYPD dropped the charges for his illegal World Trade Center walk.

Unsatisfied with the ordinary, Petit enjoys defying norms and forging his own path. Upon learning about his extraordinary feats, one can’t help but wonder what inspired him to do what others would deem unthinkable. Petit says he pondered this very question as he sat down to write his autobiography.

He believes that inspiration should be taught in school. People from all walks of life have won his admiration. He mentions Pablo Picasso, the late pickpocket Borra, juggler Francis Brunn, and Yo-Yo Ma. Some of these people are in his circle of close friends.

Although Petit enjoys learning, he also yearns to teach. Before the pandemic, he gave lectures and taught workshops on creativity and motivation. His unique journey has been a source of inspiration for others. “I create my lectures by gathering bits and pieces from my life. People often tell me, ‘this wasn’t a lecture, but more like a one-man show,’” says Petit.

Nearly every day, Petit is inspired by something his mind or eye catches. “It can be a photo in a magazine or something I hear on the radio. Just watching somebody do something can move me. It’s so beautiful, human, and profound.”

As for lessons, Petit feels that they’re neither good nor bad. “I could one day write a book about lessons,” he says. While some chapters would be joyful, he says others would be terrifying. “But every lesson learned has taught me how to do something better or enriched my life,” he concludes.