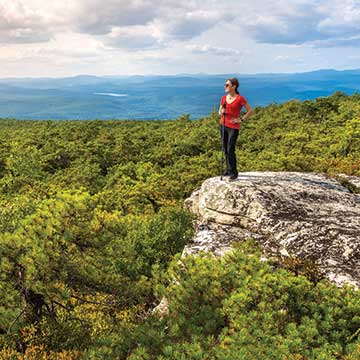 When world renowned poet, naturalist, and Hudson Valley resident John Burroughs pondered about his time spent walking through the natural beauty of the area and observing its every nuance he remarked, “I go to nature to be soothed and healed, and to have my senses put in order.”

Famous literary contemporaries like Herman Melville, Washington Irving, and Walt Whitman shared his sentiment and were similarly inspired by both the subtleness and sublimity of the natural landscapes that caress the valleys and hillsides along the Hudson River.

Though the famous bustle of New York City with its vast urban environment has earned its namesake as “the greatest city on earth” and thus has defined the very identity of the rest of the state for many Americans, traveling up one of the most famous waterways in the country and hiking the vast network of trails the Hudson River Valley has to offer, one may discover what both artists and locals have come to know for generations. The true spirit of what New York has meant to so many for so long lies within its lush and effervescent natural world. Here are ten spots to hike and explore as you walk in the footsteps of heritage and history.

Just a few towns from where Burroughs himself spent most of his life in Esopus and about four miles from the town of New Paltz sits the Mohonk Preserve. Located along the idyllic Shawangunk Ridge and partially adjoined by the Minnewaska State Park Preserve, Mohonk provides hikers with over 8,000 acres of natural wonders to explore.

Much of the preserve is made up of well kept carriage roads dating back to the 19th century that allow the casual hiker near panoramic views of Ulster and Dutchess counties. When wandering down one of the many historic trailways one cannot help but look up at the rocky cliffs that contain networks of caverns and wildlife.

It’s also hard to miss the many rock climbers dotting the cliff sides as Mohonk remains one of the most popular destinations for experienced climbers in the area.

One would be remiss when discussing hiking in the Hudson Valley without mention of its most esteemed natural icon, the Catskill Mountain Range. Indeed there are a plethora of options for hikers of all levels of experience when it comes to hiking in the Catskills, but one stands out for both its variety of trails and its utter wildness in character.

Indian Head Wilderness wraps its bucolic arms around a number of towns that lay on the eastern escarpment of the Catskill Mountains. This 11,500 acre hiking destination finds its uniqueness within its mountain peaks, hikers are challenged to traverse uneven low level terrain as well as rugged mountain topography in order receive a king’s ransom in the form of awe-inspiring views from the peaks of the Plattekill, Indian Head, Twin, Sugarloaf, and Plateau mountains.

Hikers and nature seekers do not have to travel far to experience the quiet romance of local nature, Columbia County offers many trails, preserves, and conservation areas for observing the resting beauty of what lies just outside our everyday lives. The Greenport Conservation Area is a 736-acre piece of land purchased in 1992 by the Columbia Land Conservancy.

For the hiker looking for a more scenic experience it doesn’t get much better than the five miles of trails offered plus the two mile Stockport-Greenport trail. The trails themselves present less of a challenge and more of an opportunity to picnic and observe the same scenery artists and painters like Thomas Cole were inspired to recreate while establishing the famous Hudson River School during the 19th century.

One of the most unique aspects of hiking the Hudson Valley is discovering its myriad of one-of-a-kind waterfalls that dot the local landscape. Like hunting for a long lost and invaluable treasure, these famous local waterfalls are natures estuaries for wildlife and vegetation and finding them is proof that nature’s impact and influence are timeless.

Perhaps the most popular of these natural phenomena is located in Palenville, NY. Kaaterskill Falls has long been an attraction for those looking for an easy escape from urbanity in favor of the magnificence of one of the highest waterfalls in New York and one of the Eastern United States’ tallest waterfalls.

Divided into two drops this short hike is an easy and relaxing trek toward a 260-foot inspiring reward. These falls prove that there is an innate connection between the human condition and nature itself and have inspired many landscape paintings and poems including William Cullen Bryant’s famous Catterskill Falls.

Ask any Columbia County native where the best nature experiences are in the county and you’re almost guaranteed to receive a nearly unanimous answer.

Located right on the state line between Massachusetts and New York, hikers have the option of ascending or descending to see this local landmark. The ascent offers a less challenging trek up a well maintained trail that runs alongside the creek from where the falls emanate. From the Massachusetts side, hikers are a bit more challenged to traverse rugged terrain by following blue blazes and encountering steep declines and fallen trees before ultimately meeting with the ascending trail on the New York side.

Upon reaching the summit of the falls, hikers are treated to unobstructed views of both neighboring states. With its accommodating rock steps to the falls themselves and the opportunity to get up close and personal with clear natural spring water, Bash Bish is a must for any hiker looking to explore what Columbia County has to offer.

There’s something mysteriously attractive about the area in between New York and Massachusetts. Hugged by the Berkshires and tucked within winding roads and rocky cliffs, it’s easy for the hiker to become transfixed by the mountain air and feel compelled to escape above the treeline.
In Great Barrington, Monument Mountain provides adventurous nature lovers an opportunity to satisfy that escapist urge. Waiting atop the summit of this inspiring mountain top are memorable views of the southern Berkshires and the hidden gem of a waterway that is the Housatonic River. It isn’t just the 1,642 foot summit of Squaw Peak that should inspire hikers to venture up this centuries old attraction, the numerous loop trails bring with them challenging uphill climbs along the pale quartzite mountain ridge that will make the mountain top views feel earned and appreciated.

The famous town of Woodstock is known more for its pervasive bohemian culture than the vastness of the natural world that surrounds it. Despite its contributions to music and popular culture, the small hamlet remains a gateway to some of the most sublime vistas around.

A short ten-minute drive out of town eventually leads to the trailhead at Overlook Mountain. Though well kept, the trail itself is mostly gravel which may make the traditionalist hiker long for the usual earthen footpath. Still, the view at the summit of Mt. Overlook proves an immeasurable reward for those looking to be imbued with a sense of divine connection with nature’s landscape. With relic attractions along the trail like a fire tower and the ruins of the Overlook Mountain House the mountain offers a pantheon of things to explore. Hikers should be forewarned however that parts of the trail run nearby a rattlesnake preserve so watch your step.

For hikers looking for a less popular spot and are willing to entertain an area for multiple uses, Beebe Hill State Forest in Austerlitz offers a truly personal experience. This 2,018 acre state forest is used and managed in a variety of ways including for timber production as well as recreational activities.

Harvey Mountain, which shares acreage with Beebe Hill, boasts the highest elevation in Columbia County at 2,065 feet. Like Overlook, there is also a fire tower located on the forest’s grounds, it is open to the public and offers camera-ready views year round. There are thirty miles of trails in and around Beebe Hill to make good use of, as well as two lean-tos to stop and rest or enjoy some picnicking.

Modesty with an unexpected reward may be the perfect way to describe the hike along the well-worn trails in the High Falls Conservation Area located in the village of Philmont. The two trails, which differ in difficulty from easy to moderate, run through perfectly picturesque woods that are skirted by the Agawamuck Creek. Though the trails themselves may seem modest to the hiking fanatic, part of the allure is knowing just how integral the Agawamuck Creek and the falls themselves are to the history of the village.

Speaking of falls, High Falls, which can be viewed upon reaching the intersection of the two trails, is one of the more captivating natural wonders in Columbia County. The dam above the falls that is visible from the trail was built in 1845 and, powered by the two aforementioned bodies of water, supplied enough hydropower to run the seventeen mills in the Philmont area.

Finally, for those in the Connecticut area who want to attain the sublime there is Bear Mountain in Salisbury, CT. Located only about twenty minutes from the eastern borders of Columbia County the trek isn’t actually as far as one might think when they hear Connecticut.

Bear Mountain actually shares a physical connection with the area, as well as it is designated as part of the Taconic Mountain Range. It too boasts height as well as beauty, because Bear Mountain contains the highest peak in Connecticut at 2,316 feet.

There are several ways to reach the summit of Bear Mountain, but be warned every trail included in a summit hike is designated at a high level of difficulty. Whether by Undermountain Trail or Lion’s Head, hikers have the opportunity to up the stakes and venture through thick woodlands and truly wild areas of the Appalachian Trail in an effort to satisfy the urges of their inner frontiersman. •

All information collected from park websites and the Columbia Land Conservancy.