By By Allison Guertin Marchese – featured in the Feb. 2016 issue 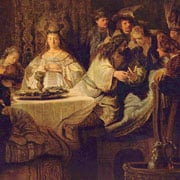 Let’s really start at the beginning and explain, for instance, why men “took wives”.

This practice goes way back to ancient Greece and Roman civilizations when a wife was property, basically a dependent of the husband. Taking a wife typically gave men a way of legitimizing their children and finding someone to care for the kids’ needs. Men took wives so they could have someone to cook, clean house, and fulfill other practical and necessary household, farm, or general domestic tasks.

I realize that most women reading this right now are already cringing, because many of these wifely duties and husbandly expectations may still be a bone of contention today. But wait, there’s more.

In history, each culture maintained its own quirky wedding traditions. For instance, in the old Filipino culture it was customary that the groom throw a spear at the front steps of his bride-to-be’s home to announce that the young woman living there was claimed. Now that’s what I call a proper engagement.

Religion also had a lot to do with a wife’s role and marriage, dating all the way back to the story of Adam and Eve. In Biblical times, Hebrew husbands were allowed multiple wives as long as he was able to pay the would-be father-in-law a good sum of money and assure the father that he would care for his daughter. There was also a bit of back and forth bartering and bribing that went on.

Since shoes were seen as a badge of authority because they lifted a person off the ground (differentiating them from barefoot slaves and serfs), to seal the wedding bargain fathers would give their son-in-laws a pair on the wedding day as symbol of transferring authority.

Along those lines, the groom was also expected to shower the bride’s family with gifts. Once the exchange of gifts and money was complete, the marriage was binding. The bride also traditionally arrived with a dowry of goods and sometimes servants and farm animals or land. The girl that was getting married was promised the money back (supposedly an initial payment for her virginity) in the event that the marriage didn’t work out..

But generally the couple happily made a contract to be together forever, or not. On occasion the husband had the option of having his wife stoned, if on the wedding night he discovered she was not a virgin.

Some wedding traditions are ghastly and hard to believe. Women throughout world cultures who were married were sadly considered servants to their husbands. This was all legal mind you, and under the law, a wife who did not show proper deference or was disobedient, there were ways for her husband to enforce his authority.

This kind of cultural norm slowed down in the Roman world where the bride was no longer “taken” but was required to give her consent with her own free will, that is to say with her father’s approval. Roman marriages were seen as more of a partnership, motivated by economics and social stature. Love did not come into play before the nuptials. Love was expected to come after marriage.

Both Ancient Greeks and Romans believed that marriage meant to be loyal to the family, friends, and home. A tradition that has, of course, endured.

A change with the time.

Before the 1500s, couples in Europe were free to marry themselves. It wasn’t until 1564 when the Council of Trent declared marriage to be a sacrament, that weddings became the property of priests and churches. Before the church got involved, couples would find their own sacred places to be married in nature, like on a hill or cliff where heaven meets earth.

Believe it or not, the notion that women were still considered chattel and all marriages were arranged marriages persisted for some time. Things started changing around the end of the 18th Century. In around 1771, New York became the first State to require a woman’s consent if her husband tried to sell property that she brought to a marriage. The act also required the judge to meet privately with the woman to reassure himself that the signature on the marriage documents wasn’t forged or her consent coerced.

The married property acts of the 1880s gave women in England the right to own property, and it’s where we get the tradition of the father walking the bride down the aisle, since the Dad was considered the original owner of his daughter. Go figure.

We can thank Pope Innocent III of 1214, for establishing the “engagement” which created a sensible waiting period for couples who were anticipating the big day..

It was the Archduke Maximilian of Austria who introduced the idea of “putting a ring on it” in 1477, when he gave his bride-to-be, Mary of Burgundy, a custom-made diamond ring fashioned in the shape of an “M..

Regarding the placement of the ring on the third finger of the left hand, we can thank the superstitious Egyptians who believed that the primary vein (vena amorous, noted by the Romans) in that finger ran directly to the heart.

A bouquet of garlic.

Though the traditional bridal bouquet in today’s weddings is often enhanced with every flower that grows under the sun, it originally was made of herbs like garlic and rosemary rather than blossoms. The idea here was that garlic possessed magical powers to ward off evil spirits.

The tradition of the veil is for the bride to bring attention to her youth and her virginity. Veils also offered brides a way to avoid the “Evil Eye.” In the past, veils weren’t always white. The color selection could be red, blue, yellow. It was the Victorian period that ushered in both the white wedding dress and the white veil to underscore a bride’s purity and perhaps her wealth.

The tradition of the dress.

The idea that the wedding dress was only worn once came about during the 18th and 19th Century when garments were only washed by hand, on rough washboards. A white dress in those days was considered a true luxury and also impossible to clean thoroughly, so after wearing a white wedding dress once, it was done.

The truth about wedding dress color tradition, is in fact, a story better retold in technicolor.

Throughout time and cultures women wore a multitude of dresses in all kinds of colors and patterns. After Queen Victoria wore white in her wedding to Prince Albert, the trend transitioned.

During war time in the Unites States, however, brides who were called to marry their men when they were on short leave from their military service wore the best dress they had in their closet or they borrowed one from a friend.

My favorite personal story is one of my parents, who were married in the late 1940s soon after my father was discharged from the army in WW II. My mother told me when I was a little girl that during the war silk and satin were hard to find, so they made her wedding dress out of old parachute material.

To this day my mother’s wedding dress sits in my cedar chest. Call me a romantic. Other women in that time period, facing the same shortages, some times used upholstery fabric or old curtains. The groom, on the other hand, often got married wearing his military uniform.

Historic traditions surrounding the wedding night vary wildly, and sadly this article is too short to provide the delicious details. But I can offer that the “honeymoon” is steeped in tradition. A few of those stories include the tradition of bridal couples in ancient Rome who would eat honey for the duration of “one moon” after the wedding. (Perhaps to cleanse and rejuvenate). This has led to the custom of using the term “honeymoon” to refer to the beginning of the newlyweds’ new life together. Historical references point to the “honey” moon as being the sweetest part of the marriage..

While no one would opt out of a honeymoon, there are a few wedding traditions that are thankfully no longer practiced like kidnapping a woman in the dead of night out of her home or village. And there remain a few strange wedding laws that are still on the books.

In Salem, Massachusetts, the town in the United States most noted for its Salem Witch Trials, the law still forbids couples to sleep in the nude in a rented room..

In North Carolina it’s illegal to “pretend to be married” when registering for a hotel room.

In Montana a couple can be married in a “double proxy marriage” without actually being present.

In Kentucky, it’s illegal to remarry the same man four times. [Four times is just one too many … ?.

Rhode Island has a marriage law on the books that says a union is to be considered invalid if either party is declared an idiot or a lunatic.

And the good ole “Blue Laws” in Connecticut dictate that it’s illegal for a married man to kiss his wife in public on a Sunday.

We can be Royals

Across the pond, the historically strange wedding traditions are a bit more obscure. In Great Britain it was considered good luck for the bride to kiss a chimney sweep on her wedding day. He supposedly had special powers, and when he cleaned the chimney he also swept away evil spirits.

A morganatic marriage is a union of a person of royal blood with one of inferior rank. Such a marriage is called a “left-hand marriage” because at the wedding ceremony, the husband holds the bride’s hand with his left hand, instead of his right. Though these marriages are recognized by the church, the father cannot confer on their children his rank or property.

A few other historic royal wedding traditions seem to include big cakes. Queen Victoria’s wedding cake was three yards wide and weighed 300 pounds. Meanwhile Queen Elizabeth II had 12 wedding cakes. The one she cut at her wedding was nine feet tall and weighed 500 pounds..

No one today should realistically need a 500 pound wedding cake, but who’s to say. If you’re getting married and you are attached to history and tradition you should go for it. Best bet is to just have balance; something old, something new, something borrowed, something blue, and a sixpence in your shoe.