It feels like something from a bad dream during a cat nap. Quarantine; twenty-furr seven with my family. Something I thought furr sure would never happen in my nine lives.

My mom is diving me nuts! She’s a neat-furreak to begin with, but scurrying about with that noisy vacuum everyday is a bit much. There can’t possibly be that many hair balls tumbling around… as such, there are only a few carfurrly selected places I catnap.

As furr my baby sister, is it really necessary to have every single electronic toy she owns on all at once? Ok, I may be exaggerating a little. It’s just one toy on at a time (purr my moms rules of course), but the point being my catnaps during the week are normally one hundred purrcent silent – just that way I like them.

And quite frankly, her little hour and a half nap in the afternoon just doesn’t cut the turkey!

And lets not furrget about my dad. He’s been checking things off the honey-do list my mom has for him, which requires all kinds of ruckus. He’s also been catching up on some papurr work in his office. Since there is so much activity going on, I obviously can’t get as much shut eye as I’d like, so the next best thing is to sit on his desk and look purretty – and use my little cotton ball paws to bat pens and paperclips on the floor. I, furr no reason, get in trouble furr this. Not sure why, because my mom is adamant about keeping the house nice a tidy.

Someone purretty please wake me up when this nightmare is ovfurr furr good! 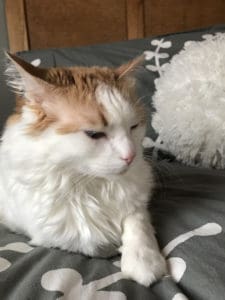