The wait for West Side Story is finally over as the pandemic release of Steven Spielberg’s rendering of the class has finally hit the theaters, just in time for the holidays. And, it is …AMAZING

From the opening credits through to the final heart-rending high angle shot of the impromptu funereal parade, there is not a moment in this 2 and a half hour spell-binding film that is not meticulously planned and brilliantly executed.

And, these characters are real people, not cliches or cardboard seat takers. Ranging from young Rachel Zegler who triumphed over 30,000 applicants for the role of Maria (yes … 30,000!) to the laser-like performance of Rita Moreno who, at 90, has returned to the story that won her a coveted OSCAR for her role in the first film rendition in 1961. 60 years later, Moreno is the emotional bedrock on which this interpretation of Shakesepare’s Romeo and Juliet rests.

Tony Kushner’s script captures all the tension between the Sharks and the Jets, all the pathos of living in a condemned neighborhood and all the meteoric highs and abysmal lows of a love story lasting only a few, short days. By keeping the integrity of the musical numbers of Bernstein and Sondheim, Spielberg has created a skeleton that is familiar and engaging. With Kushner’s story twists, added characters and expanded settings, West Side Story comes alive as never before. 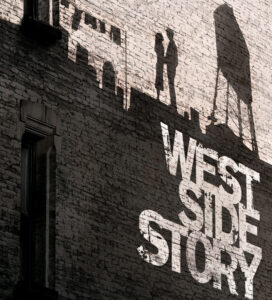 Those with early memories of the stage production of West Side Story or the initial film rendering will resonate with the importance of choreography in the story telling. It may seem counter-intuitive to have gang members dancing, then fighting to the death, but “When you’re a Jet” would be a hollow anthem were it not for finger snaps, twirls and leaps. Justin Peck, TONY Award winning choreographer, was selected to fulfil those duties for the film, and the ensemble responds to his imagination with acrobatic ease. Whether the scene is the cleaning crew at work after hours in a department store or the prankish hooliganism on the streets of New York, the dancing is superb.

And, it is essential to summarize this monstrously grand motion picture by celebrating the musical mastery of the cast and the sheer pleasure it is to hear the old, trusted, revered music and lyrics rendered by flawless voices. Rachel Zegler has a range that is almost eerie. As Tony, her star-crossed lover, Ansel Elgort is pitch-perfect. The rest of the cast follows suit, which leads to one more moment of celebration for Rita Moreno. 60 years after she appeared as Anita (the role now fully inhabited by Arlana DeBose), she appears as Valentia, a newly created character. As the tragedies continue to escalate in the story, she takes a moment to tie her own life into the lives of the young men and women around her. Moreno’s rendering of Somewhere would be a show-stopper if done in live theater. Since Steven Spielberg’s West Side Story is a magical film, the audience can feel the catch in the throat, the tear at the corner of the eye and celebrate one of the most amazing films to find release in this or any year.

West Side Story is playing widely in theaters. It is rated PG-13.