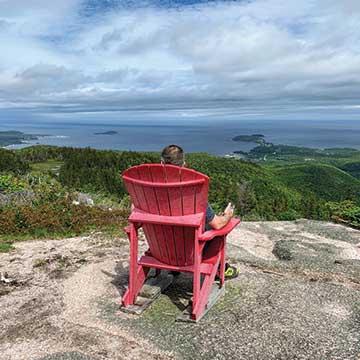 There is something inherently interesting in asking someone about their vacation plans. Beyond the social propriety of inquiring about the status of a fellow human being, travel plans can be quite revealing about the personality of the traveler. Do they go to the same place every year, or do they explore new destinations? Do they only travel in the summer or throughout the year? Do they prefer mountains or oceans, resorts or roughing it? “If our lives are dominated by a search for happiness, then perhaps few activities reveal as much about the dynamics of this quest – in all its ardour and paradoxes – than our travels,” writes contemporary philosopher Alain De Botton.

If what De Botton says is true, then we would all benefit from a more mindful approach to vacationing. So if I’m being completely transparent, my vacation this year began on Instagram. I have a friend who posts dozens of photos from the hikes he does every weekend, and he manages to find the most incredible destinations that are just off the beaten path. Think the Upper Peninsula of Michigan. Smith Rock State Park in central Oregon. Lassen National Volcanic Park. You may have to look them up, but if you search for them on social media, you’ll see what I mean. All the views, none of the crowds.

At least that’s how it looks on Instagram. My newfound commitment to a mindful vacation, however, requires me to examine my thinking and motives more thoughtfully. A trip to the Maroon Bells in Colorado a few years ago proved what a disaster it can be to plan one’s trip around appealing social media posts. I spent the first few hours of a three-day backpacking trip circumambulating scantily-dressed twenty-somethings who were busy pursing their lips and adjusting the tilt of their trucker hats in coordination with the scenery they were trying to get in the background of their Snapchats. To the rest of the world, it probably looked like they were the only ones in the park that day.

My friend’s posts about Cape Breton, Nova Scotia, had that same edge-of-the-earth feel, but given its location at the northeastern-most tip of the continent, it seemed plausible that I might actually find the isolation that I was seeking in a vacation. Stark seaside cliffs and dramatic views of the North Atlantic suggested a dynamic like that of Acadia National Park where one could hike tall mountains with views of the ocean, without Acadia’s crowds.

But why was I seeking isolation in the first place?

As a high school principal, I spend my working hours obsessing over a million details involved with running a school and interacting with scores of people, so when I vacation, I prefer activities like backpacking that reduce existence to the essential components of life: food, water, heat, and shelter.

Through intentional self-denial, I achieve an ascetic intimacy with my surroundings that anchors me in the present and re-creates me in a way that all recreation should. In other words, I look for the opposite of my daily routine.

In favor of the unknown

That also means a chance to escape bells, meetings, schedules, and routines in favor of the unknown and unplanned. Having never been to Nova Scotia, I could check the “unknown” box for this trip, but my familiarity with the outdoors and the routines of backpacking, learned over decades of practice, would have sapped the trip of some adventure. So instead, I opted for a whole new breed of adventure by taking a 19’ travel trailer along as my primary residence for the week.

At its core, adventure is exploring the unknown, however we interpret that. I’ve been within striking distance of moose, rattlesnakes, bears, and mountain goats, but the prospect of trying to back my Airstream into a camping space truly terrified me. It took me back to the trauma of learning to drive stick by being forced by a foreman to drive a 1983 crew cab Chevy from a construction site in New Haven back to the garage, three towns over. Horns honking, drivers fuming, and me grinding the last teeth out of the gears.

This is not to mention all the unknowns of RV life. I’d grilled every owner I knew for tips and tricks, and I’d taken a short excursion to Lone Oaks in East Canaan, CT, to try out the basic functions, but I had yet to really put it all to the test. What I did know was that I didn’t know much about this whole venture, but I was about to learn on the road.

What was important metaphysically was the vision I had for this trip that, try as I might, I could not dislodge from my imagination. Whenever I envisioned it, the same image arose, as if planted there by the Airstream marketing department: it was a view from beneath the canopy of my trailer, cheese and crackers by my side and a cold beverage in hand, watching the sun set over the ocean. That’s it. Never mind that the sun sets over the Pacific most of the time – this was my vision.

So when the first evening presented me with a pair of Adirondack chairs overlooking the Atlantic at a campground along the Maine coast, I was unprepared to embrace the fulfillment of my expectation, even with many of the elements in place. “Too soon,” I thought, and what’s more, the chairs were hewn from unfinished birch logs, which proved to be rather painful after ten minutes. Then there were the bugs, which set in on my scalp just as the last brush strokes of pink left the sky. Sure, the view was spectacular, and the prospect from thirty feet above the water was approximately aligned with my expectations, but unprepared for it, I had failed to acquire cheese, and left the beverage back in the trailer.

The next three days of rain ruled out any hope of realizing my vision, but they also introduced an element to it that I had not anticipated: reality. Boredom, primarily, which ebbed against the bulwarks of my fantasy in unexpected and creative ways, both during unending expanses of unremarkable Canadian highways and inside the Airstream, where each evening, instead of surveying the sunset, I listened to raindrops. Somewhere along the way, a slight stiffness in my shoulder grew to a dull throb, and it was clear that in addition to reality, I had failed to account for one other aspect of my vision: myself.

In conjuring up a depiction of the ideal vacation, I had snared myself on a trap of my own making. I had elevated the four or five simple elements in that vision to a sine qua non of my vacation, even when I could not possibly achieve at least one of those elements on this side of the continent. The fantasy of relaxing in front of my camper and taking in a sunset was inconsistent with the reality of Nova Scotia’s (as I was soon to discover) notoriously Scottish weather, but more importantly, it was inconsistent with my inability to sit still when all five elements of said vision have not been achieved. If I got the right cheese, I would get the wrong wine. If the sun wasn’t setting at just the right angle, the whole image would be compromised. There would always be something missing from the picture.

Live in- and enjoy the moment

And isn’t that a delusion to which we all fall prey when we vacation? We want to believe that in the right climate, under the right conditions, we will achieve a happiness that we do not in our ordinary lives. The poet Charles Baudelaire noted, “It always seems to me that I’ll be well where I’m not, and this question of moving is one that I’m forever entertaining with my soul.”

Many of us spend more time planning future trips than we do appreciating the present, to the detriment of both the trip and our lives.
On the last morning of my trip, I awoke to a halo outlining the ridge behind my campsite. The leaves of a nearby birch grove flickered in the breeze, and sun dappled the forest floor. Birds chirped, and a man with a towel over his right shoulder plodded toward the showers. I stepped from my trailer with confidence that my long-sleeved pullover and shorts were just right for the temperature. Eventually, I made coffee, and the morning was complete.