When a Love of Horses & Art Collide 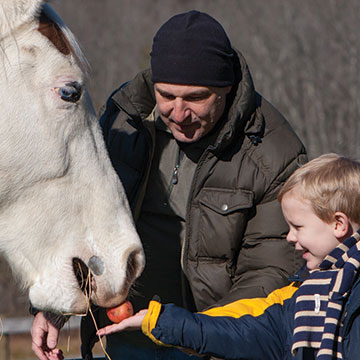 The man with the microphone does not usually speak to large groups. His voice is measured, almost a whisper, at times. What he is saying is heartfelt, and the audience spread in sweeping arcs on the hillside listens intently, not wishing to disturb the moment. “I’m not sure I knew who I was …” This is a dramatic, personal, deeply engaged presentation. Then, suddenly, the moment changes. As if on cue, a great white horse moves from across the round corral and stands next to the speaker, placing its great head on his shoulder. The man with the microphone is both speaking about- and experiencing The Equus Effect.

Jane and the horses

Jane Strong spent her childhood on the back of a horse. Riding became second nature until at age 15 when Jane had a revelation. “Competitive riding was all-consuming,” she admits. “I knew I had to pay attention and do more with my life. I sold my horse, started to concentrate on school, and set a new direction.” The winds of fate pushed Jane far afield from the life of a horsewoman.

High school, college at Simmons in Boston, a semester in Denmark, and a passion for cultural anthropology led Jane to the complex world of market research. When eBay began it’s dizzying rise in the American consciousness, Jane was part of the research and trend analysis team that shaped the company and led to its success. Brands and corporate marketing efforts kept her on airplanes, hopscotching across the country relating basic human needs and appetites to business decisions. Horses were a distant memory, part of childhood, with no connection to the career Jane had chosen. Until…

What goes around comes around

More than 30 years after Jane had dismounted for the last time, she was living in Westport, CT and speaking with a friend who did some riding in nearby Bedford, NY. It was a casual invitation, at best. “Come riding this weekend.”

Jane was naturally skeptical. It had been so long. The athletic skills that had been muscle memory had long since been replaced by analytical skills that were in great demand. “I got on that horse and was really unsure of myself. It had been so long,” Jane recalls with a smile. “But then, something happened. I suddenly felt centered. There was a sense of unity, of communication.”
The wind’s direction had changed again, and in short order, Jane Strong was back engaged with horses. This time, however, it was quite different. This was not about competition and the rigors of training horses to do what the rider expects. This was a much more natural connection – “natural horsemanship” she calls it – and it became its own passion.

A world-class “horse whisperer” in California, Monty Roberts, offered courses for individuals and their horses. His unique training seminars were populated by breeders, jockeys, horse people of many interests and professions. Jane signed up and realized that her instincts were overwhelming. “I could actually see the interaction, the energy between horse and owner. Some people were too demanding of their horses, others too detached to make a real connection with the animals. It was so obvious to me. The horses were much more intuitive than their owners.”

With a remarkable understanding of the relationship between horses and humans, Jane pursued her study of those interactions. She immersed herself in the study of “natural horsemanship” with Linda Kohanov, author of The Tau of Equus, at Eponaquest in Tucson, AZ, and searched for a way to use her understanding for the public good.

It was 2009 when a very stark statistic brought things into perspective for Jane. “I was reading an article that stated, quite simply, that 22 returning military veterans commit suicide every day. They’ve survived the ravages of war, only to come home and experience isolation with no hope of changing … of moving forward.”

And, as simply as that, the concept of The Equus Effect was born. Jane knew that horses could, because of their inherent understanding of danger and calm, threat and assurance, become great teachers for individuals searching for personal resolution and peace.

“We send people into battle after six months of basic training. We teach them to obey orders and finely tune their instincts of survival. We train them to understand that one mistake could be fatal – to their unit, to themselves. Once a tour is over and the veterans return home to family and friends and jobs, the process of reversing those highly charged messages does not take months. It is supposed to be accomplished in days. Back home. Mustered out. Go on living.”

“We never treat our veterans in The Equus Effect as if they’re broken or damaged. Being a veteran is not the diagnosis of an emotionally distressed condition. These are people who can learn from the gentle intuition … the metaphysical connection with horses … so that they can return to living calmer, more open and accepting lives.”

The Equus Effect has, over several years of refinement, presentation, information, lobbying, and educating become a five-week program offered to veterans that is supported and promoted by the clinicians working in regional VA Hospitals. From 21 vets who experienced the program in 2013, this year’s group will exceed 150.

There is no riding in The Equus Effect, only the close interaction between humans and horses. The effects are magical.

A home in the country

The Equus Effect is presented in the gentle hills above Sharon, CT on the property that Jane shares with her partner, John Brett. “I couldn’t be more supportive of what she’s doing,” affirms John. He is not a horseman. He is not a psychologist. His life path took him in an entirely different direction, but the admiration and devotion to Jane and her work is immediately obvious.
John Brett knew from early on in his life that the world of finance had great allure. Getting his degree in Finance from Fordham University, John met his future face-to-face. “It was a class in Portfolio Management. Doesn’t sound all that sexy, but it hit me. That was it.”

One does not simply graduate from college and become a portfolio manager. “My first job was being a runner on the floor of the New York Stock Exchange. Someone counseled me that the best way to get a job was to wait outside the NYSE in the afternoon, and when the guys came out wearing the badges, go up to them and ask for a job.” It apparently worked, and John set out to smartly climb the steep financial learning curve by running buy and sell orders on the crowded floor. He eventually settled in the rarified air of selling institutional derivatives … a position from which he retired after 25 years.

“I wanted to do something else … to experience other things besides Wall Street,” offers John. He and Jane had met as they both were consulting for a mutual friend starting a business. When their business friendship grew into a personal relationship, John became keenly aware of Jane’s hopes for a setting that would allow The Equus Effect to function as its own entity. Her hunger for space and a supportive environment matched his desire to move beyond the city and the close-in suburbs. “We wanted to get away from places that were a strain on the infrastructure and have a place that could be as self-supporting as possible.” Their striking home is nearly energy independent with solar panels turning sunlight into electricity and solidly insulated walls making the heating of their home almost comically inexpensive.

John admits that moving from Connecticut’s “Gold Coast” to the reaches of the Litchfield Hills was not without its perils. “I didn’t know what I’d do up here,” he says. “I knew no one, I wasn’t sure I’d meet people and wondered if I could ever get a sense of community.”

Sometimes the simplest things can change a person’s perspective. Always a devotee of art, John decided to open a gallery devoted to local, emerging artists. He ran the gallery for several years, never realizing a profit, but meeting an ever-widening circle of people who have become friends. “The business was like standing in a cold shower tearing up $50 bills – but I loved it.”

A lifelong fan of seeing the world through the viewfinder of a camera, John started shooting pictures of the picturesque countryside and would occasionally show friends his work.

“When Lazlo (as in Lazlo Gyorsok, celebrated Main Street Magazine photographer) looked at some of my photos and said ‘Hey, those are very good,’ I realized that hobbies can become career segments.”

John’s photos have graced several local gallery walls and he continues to find an eager audience for his views of the countryside and its inhabitants. Today John is an artist mentor at “artgarage” at the Housatonic Valley regional High School and exhibits his photography at area galleries.

John’s appetite to learn and explore and venture into new and exciting areas was evident on the day we sat down to talk. Energetic and polite to a fault, the conversation did have to have a time limit. John was leaving for the airport in two hours, to fly to Iran for two weeks of cultural immersion and photography. “I’ve always wanted to go,” he offered with a smile. “And, along came my chance. I never thought I’d get there … but I’m on my way.”

It is that openness to discovery and change that makes John and Jane such a comfortable partnership. Neither one of them dwells on the past or shows any tendency to carry baggage of ventures tried or frustrations experienced as they move forward. For Jane, The Equus Effect is very much in its infancy. “In five years, I’d like to be regional, even national,” she says with steady optimism. “We’re gaining an expanding network of facilitators who can support veterans as they come in contact with their emotions and learn to make sense of them. The impact on them and especially on their families is truly profound. We’ve got so much more to do.”

Back in the corral

The veteran, the former sniper, is concluding his remarks. Nearby, his wife belies the emotion that has been at the core of his re-connection with himself, his family, and the people around him.

“All of a sudden, I felt safe,” he offer as affirmation of what The Equus Effect did for him. Nearby, “Tango,” the great white mare stands by her friend, assuring him that his openness and honesty are just what are needed. And, the audience bursts into applause, offering their loving support to the people and horses who have made such a great difference.

The Equus Effect is a non-profit endeavor supported by contributions from individuals concerned about the complete welfare of our returning veterans. More information can be discovered on their website where the viewer will be greeted with the vision: “A country where veterans have the opportunity to enjoy the physical, mental, and emotional freedom they were willing to give their lives to protect.”