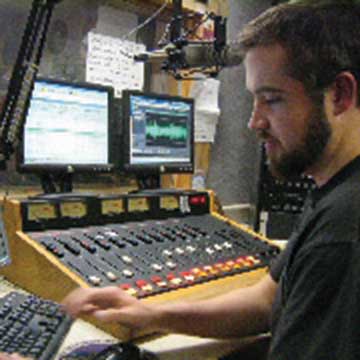 The very nature of radio broadcasting in the United States has gone through what Shakespeare termed a “sea change” in the 100 years since KDKA in Pittsburgh, PA, took to the airwaves on November 2, 1920 to announce that Warren G. Harding had defeated James D. Cox in the presidential election. Harding won in a landslide. The few residents of western Pennsylvania and neighboring Ohio who had receivers found that out the night before America’s daily newspapers carried the news.

Radio had the advantage of being instant, filling its broadcast area with “free” information. The revolution had begun.

AM, then FM … satellite channels then streaming services across the internet. Some things about radio programming have change over the past 100 years while others – the fundamental services of information and entertainment – have doggedly remained the same.

A radio station for Salisbury, Connecticut

It took a full 66 years between that first broadcast on KDKA and the granting of an FM broadcast license for station WKZE -FM assigned to Salisbury, CT. There was a “daytime” license in place for an AM station, but the addition of an FM license changed the radio landscape in western Connecticut, southern Massachusetts, and western New York.

Ownership changes, format re-alignments, locating the right place for the station transmitter, and finally placing the broadcast studios in Red Hook, NY, are all mile markers on the road to what is, today the station that reaches across the Mid-Hudson Valley to portions of the southern Berkshires and the Litchfield Hills. WKZE-FM, 98.1 … “the home of musical diversity.”

WKZE-FM’s broadcast format is, at the very least, an eclectic presentation of carefully curated music that spans a rich variety of genres, a refreshing consciousness of the communities the station serves, and the local businesses that comprise its advertising roster. All of those elements are flavored with a justifiably earned measure of pride.

Station owners Will and Barb Stanley came to the “Album Adult Alternative” formatted station after years of being fully immersed in New England radio. From Hanover, NH, and White River Junction, VT, down the Connecticut River Valley to Northampton, MA, they have been “radio people” working together for over three decades. The owner/operators have a very clearly focused approach to broadcasting. “We are musicians at heart,” offers Will Stanley. “We hire people for the station who are truly engaged in music, and we make them into radio people. It makes a big difference.”

A fine example of that transition is Rick Schneider who hosts the Monday through Friday 6 to 10am Up and Running Morning Show and serves as the station’s Music Director. A trained vocalist, Rick appeared with several bands in the Hudson Valley, developed an affinity for engineering, mixing and recording the bands that appeared in local venues, then made the jump. “I was serving as the announcer for Thursday sessions that were being broadcast across the valley,” he remembers. “One day, the local station made the off-handed suggestion that I ought to think about being on air. I tried it. It stuck. And, here I am.” Since 2007, Schneider has been on air and is responsible for the fascinating mix of music that fills the WKZE-FM day.

“I assemble all of the playlists, finding connections between genres that range from jazz and world music to folk, rock, and classic American Songbook offerings.” The station welcomes what Schneider terms “thoughtful” suggestions from the listening audience, many of whom are regular listeners and respond to the “musical diversity” that has become the hallmark of the station.

From the deli counter to the control room

Afternoon drive time host Will Baylies remembers the energizing moments when his radio career began. “I was a PoliSci major at Bard College,” the production director of the station recalls. “When I was a junior, the college station, WXBC, went on the air and it was truly student run – with all that term implies. Folks wouldn’t show up for on-air shifts. The station would go dark for a while. It was as undisciplined as it could be.” Undisciplined except for Will Baylies. “I had a weekly show on Friday night from midnight to 2am. I always showed up. It was energizing.”

College behind him, Baylies, a California native, decided to stay in the area and found work at a local deli. With his keen sense of music history and appreciation of music of all genres, he met the Stanleys across the deli counter. Casual conversations led to an appreciation of both the dedication and the eagerness to learn projected by the young man from Bard College. “I started out as an intern – just learning the techniques and tricks I’ve been on-air since 2004.”

Gone are the days when a radio signal went only as far as the transmitter could send the radio waves. WKZE-FM streams its signal, live, on its website … a fact that allows Will’s father, who now lives in Oregon, to keep up with his son on a regular basis. “We know the community – the businesses – the farmers. And now, so does my dad.”

While the radio programming services that fill the nationwide appetite for country, classic rock, Gospel, urban contemporary, and the other mass market formats attract national advertisers, WZKE-FM is a true local voice and respected force. Advertisers are businesses that dot the Hudson Valley and neighboring communities in Massachusetts and Connecticut. Not only do many of the advertisers voice their own commercials, but the station gives them additional time to do station identification spots throughout the day. John and Cindy, familiar voices on the air from their spots promoting their store, North Elm Home in Millerton, NY, summed up their attachment to the local station: “WKZE is the hometown voice we need more than ever! They are a comforting radio station keeping us all in touch.”

Several years ago, a sponsor came to the studio to voice his own commercial. Will Stanley heard the resonant tones of a local business owner and was pleasantly surprised. “He was a dead ringer for Karl Cassell, the legendary NPR voice that was a national fixture on Morning Edition for years.” Stanley asked him to voice the legal station identification that plays at the top of every hour, and those who remember Cassell’s resonant voice are still fooled every time it airs. Since the rules adopted by the Federal Communications Commission allow stations to place their studios within a 25 mile radius of the city of license, the hourly signature acknowledges both. “This is WKZE-FM, 98.1. Salisbury … Red Hook.”

With a deep affinity to music and the performing arts, the Stanleys have ensured that entertainment opportunities in local venues are promoted on a regular basis through their Arts Calendar feature.  Whether it’s the weekend concerts at Infinity Hall in Norfolk, CT, or the next scheduled performance at the Bardavon in Poughkeepsie, NY, or what’s happening at Daryl’s House in Pawling, NY, the schedules are promoted and attendance encouraged, often with on-air ticket giveaways.

The activities on the many non-profit organizations that dot the area are equally featured, provided as part of the Community Bulletin Board announcements that highlight the fundraising activities that are eager for attendees.

Through the seasons, through times of national emergency, through the economic, physical and social challenges that have beset the country, the enduring role of radio stations has kept audiences informed and entertained. WKZE-FM is a singular example of that service, lifting the spirits of its listeners by consistently “celebrating musical diversity.” •

WKZE-FM is at 98.1 MHz on the radio. Online, the station information and streaming service can be accessed at 981kze.com.