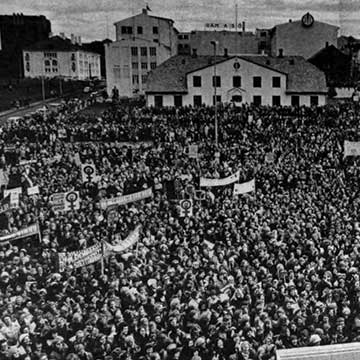 Once upon a time, on the tiny island country of Iceland, women across the land took a day off. From farms to factories, schools to shops, and homes to hospitals and hotels, women decided to let their brethren know their worth.

In this tale, no Prince Charming sallied forth on a noble steed to save the day and set things right. Rather, these women embraced action on their own behalf. Quietly but visibly they battled the forces of economic and political inequality. Their weapons were courage, cleverness, resolve, and a bit of humor.

On October 24, 1975, they left men behind in the home, factory, and office to manage without them. They showed the country the real value of women’s work.

Iceland’s Women’s Day Off became the catalyst for change within that country. One year later, the Gender Equality Act was passed that outlawed gender discrimination. Within five years, Iceland chose its first woman president, Vigdís Finnbogadóttir. In 2009, it elected its first woman and openly gay prime minister, Jóhanna Sigurðardóttir.

For the past eight years Iceland has led the charts in the World Economic Forum’s Global Gender Gap Index. In 2016, it closed in on 87 percent of its gender gap across the four parameters of economic participation, educational attainment, health, and political empowerment. In contrast, the United States ranked 45th out of 144 countries with a 72 percent parity rating.

The Economist magazine’s 2016 Glass Ceiling Index cited Iceland as the best place to be a working woman. The United States is ranked 20th out of 29 countries surveyed.

The Glass Ceiling Index also measured other important benchmarks about how women fare in the economy. While the US and Iceland are equal in the number of women in managerial positions, women in Iceland hold 44 percent of corporate board memberships; in the US that number is 20 percent.

Glass Ceiling also reported that childcare absorbs 6.5 percent of an Icelandic family’s wage. Here, that figure is 35 percent. This statistic becomes even more relevant when you consider the increasing number of children raised by single women. Federally mandated paid leave for parents in Iceland is over 16 weeks for women and eight weeks for men, compared with no such mandate for men or women in the United States.

Today, Iceland’s political parties have voluntary quotas of 40 percent for female representatives. In the 2016 elections, women in Parliament reached 30 out of the 63 seats, or 48 percent. In the US, there are 104 women in Congress out of 535 seats, just shy of 20 percent representation.

So why can Iceland accomplish what we can’t? How did their Women’s Day Off galvanize a country for the long march toward gender equity? What are the human stories that evolved from that day? These are questions that Emmy award-winning documentary filmmaker and journalist Pamela Hogan will explore in her upcoming documentary about the day.

Hogan’s oeuvre has a distinct pattern – one that highlights the stories of women. She reflects, “I’m drawn to underreported stories, and often these involve women. In many cases these stories are collective and collaborative. It’s not about one woman, it’s about many women coming together to solve a problem or address an issue that affects them all. If we don’t tell the stories about ordinary women who have managed to do the unimaginable – these stories disappear.”

Hogan sees Iceland’s Women’s Day Off as one of those collective narratives that needs to be explored and shared. “Without email, without social media, and with women living in isolated rural communities, organizers were able to get the word out and mobilize women from all walks of life. It was an extraordinary achievement,” she continues, “Sewing circles and women who met for coffee became involved in organizing the Day Off. There was an air of unreality about it, as if the women didn’t believe it would really happen – and then it did.”

Hogan’s work includes the critically acclaimed Looks Like Laury Sounds Like Laury about the mother of two young children confronting a neurological breakdown. She co-created the Women, War & Peace series and directed the first episode, I Came to Testify, about the Bosnian women who changed international law by testifying about wartime rape for the first time in history. Hogan also produced PBS’s international series Wide Angle. In that series, she originated the Emmy winner Ladies First episode about women’s leadership in post-genocide Rwanda.

Hogan, a part-time resident of Lakeville, CT, is an adjunct instructor in Columbia University’s Master’s Documentary Program, where she observes, “Most of my students are women from many different countries. They have stories to tell and are drawn to long-form documentary to convey in-depth narratives that transcend the soundbite culture of today’s media.”

The little Iceland that could

The United Nations had named 1975 the International Women’s Year. In observance of this, women’s organizations in Iceland formed a committee to raise awareness about inequity in wages and opportunities, severe underrepresentation of women in government positions, and the lack of value placed on women’s contributions, both paid and unpaid, in Icelandic society.

One such group was the radical feminist Redstockings, who for years had advocated for a strike against the systemic oppression of male patriarchy. The 1969 Redstockings Manifesto identified men as the agents of that oppression. It asserted that, “Men have controlled all political, economic and cultural institutions and backed up this control with physical force.  They have used their power to keep women in an inferior position. All men receive economic, sexual, and psychological benefits from male supremacy. All men have oppressed women.”

Others involved in the planning saw this seemingly extreme and polarizing view of men, and the societal institutions that supported their historical supremacy, as polarizing and alienating to scores of women who viewed their family lives, motherhood, and marriages as valuable and an important part of their identities.

These organizers believed that approaching the event from this radical vantage point wouldn’t garner support from women from all backgrounds and ideological viewpoints, as well as labor unions. The planners compromised, and instead of calling it a strike, illegal in 1975, they adopted the language of “Women’s Day Off.”  In that spring, the Women’s Congress in Reykjavík passed a motion that “urges women to take a day off on October 24, United Nations Day, to demonstrate the importance of their work.”

Hogan queries, “Who could have a problem with women taking a ‘day off’? The language was less confrontational but the effect was the same. Support by rural and urban, young and old, educated and less educated, as well as labor unions, was near universal.”

And so, it happened in this country with a population of 220,000 and a size comparable to the state of Virginia. On that extraordinary day, from noon to midnight, 90 percent of Iceland’s nearly 60,000 women walked off the job.

Approximately 25,000 of that number travelled to the afternoon rally in front of Parliament in Reykjavík. More than one tenth of the country’s population gathered to speak and listen, bond and strategize, laugh and cry.

Speakers at the rally ran the gamut from feminist leadership to Aðalheiður Bjarnfreðsdóttir, the union head for women cleaning and working in kitchens and laundries of schools and hospitals. This “ordinary” woman addressed the crowd from the heart. Her involvement that day led to her subsequently being elected a member of Parliament.

Back on the home front, sausages sold out of markets, children terrorized their fathers’ offices, toddlers were bribed and placated with sweets, and more importantly, the country ground to a halt. Flights didn’t take off, meals went unmade, type was not set for the daily paper, and the day earned another moniker bestowed by the males left behind – The Long Friday.

In her film, eponymously entitled The Long Friday, Hogan hopes to also explore the men’s side of the story. “The response of men to this day is so important. What did they think? How did they respond to their wives walking out the door on that October morning? And how did that transformative event change the mindset of a whole generation of Icelandic men?”

For Iceland, the ending of this tale is still unwritten, but it’s getting closer. On October 25, 2016, to commemorate the 1975 day off, women left work at exactly 2:28 pm. The time remaining on the work day clock represented the “volunteer” labor effectively resulting from the remaining 14 to 18 percent gender wage gap. On the current trajectory, this gap would take 52 years to close.

That time frame just decreased. On March 8, 2017, a day also known as International Women’s Day at the United Nations, Iceland’s Prime Minister Bjarni Benediktsson introduced new legislation that would require Icelandic companies with more than 25 employees to certify every three years that they pay men and women similar salaries for similar work. “Gender equality benefits all of us,” he said.

And when we have that, then we’ll live – and work – happily ever after.

Join Pamela Hogan on Sunday, June 25 at 11:00 am at The Moviehouse in Millerton. She will introduce a short preview of “The Long Friday,” her documentary in progress, and explore the process of independent filmmaking. There will also be a Skyped discussion with Icelandic women involved in the 1975 Women’s Day Off. The Moviehouse is located at 48 Main Street, Millerton, NY. Tickets are free, doors open for seating at 10:30 am. For more information, visit www.themoviehouse.net.