There are few things I love more than cinnamon-sugar toast. Toasted white bread, spread with softened butter and sprinkled with a sweet-spicy blend of cinnamon and granulated sugar is that which all of my best childhood breakfast memories are made. The bread was Pepperidge Farm and the butter Land O’Lakes (or maybe even Fleischman’s Margarine) and it was all just too good to be true.

As an adult, I indulge in cinnamon-sugar toast far too infrequently, but I make up for it by almost always having it on offer when feeding breakfast to my family. Or, on special occasions, by baking up this yeasted cinnamon-sugar bread for them.

This loaf pays tribute to the toast of my elementary school days, and just happens to be mind-bogglingly delicious. A super easy, yeasted dough is thrown together in a stand mixer (I call for instant yeast in my recipe, which does not require that your ingredients be at a specific temperature before combining them, and thus further simplifies the assembly of said dough). I call for adding a bit of butter and an egg to the dough, for richness. I also use buttermilk, as the dough’s liquid, for tang and tenderness, and a bit of potato starch to soften the crumb. 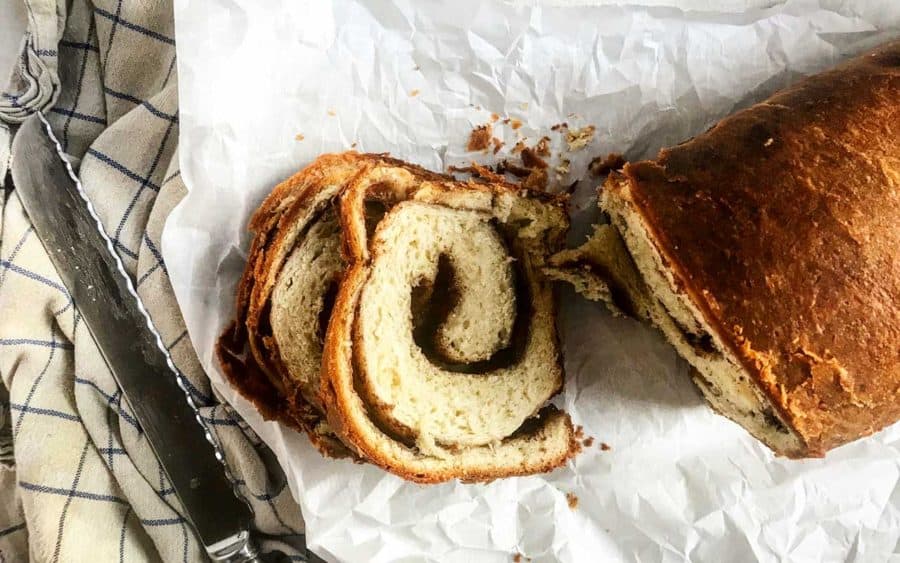 Yeast, I know, can be scary for some: what with fears of killing it with liquid that is too warm. Or, waiting patiently only to find that it never activates. But this recipe is truly foolproof. I have over-proved it on hot days and under-proved it on cold ones, and yet still the bread is always soft and pillow-y and is the perfect vehicle for the lovely swirl that gives it its signature “cinnamon-sugar toast” vibe.

The swirl is, of course, my favorite part and so I am generous with my sugar and equally as generous with my cinnamon. I mix the two together and then brush melted butter on the rolled-out dough, before sprinkling my sweet-spicy concoction over all. The melted butter adds lusciousness to the bread, and helps the filling stick to the dough. After the sprinkled dough is rolled into a tight cylinder – and please roll as tightly as you can, as the tighter you roll the dough, the more ribbons of swirl you will have in every bite – more melted butter is brushed on the top, giving the bread its signature (or at least “signature” to those I live with) glossy shine post-bake.

And yes, once removed from the oven a final coating of melted butter is applied (really just because I cannot leave well enough alone). I like to let the bread rest almost not-at-all, as I love serving slices still warm from the oven, spread with softened butter. However, because it is so darn good toasted, letting it come to room temp and toasting up slices is equally as delightful. The swirl is present in almost every bite of the bread and that is a good thing for all of the cinnamon-sugar toast lovers amongst us. And because the dark swirls against the white crumb is just such a heavenly sight.
A final word about making this ahead: after you roll the dough into a cylinder and place it in the pan, and before its second rise, you can wrap it in plastic wrap and place it in the refrigerator over night. In the morning, let it come to room temperature on the counter and then bake as directed.

Grease a medium bowl with vegetable oil or nonstick cooking spray. Grease a 9-in-by-5-inch loaf pan with nonstick cooking spray or softened butter.
To make the dough, in the bowl of a stand mixer fitted with the paddle attachment, combine the all-purpose and bread flours, yeast, sugar, salt, and potato starch and mix until incorporated. Add the butter, buttermilk, and egg and mix on medium-low speed until a shaggy dough forms.

Transfer the dough into the prepared bowl. Cover the bowl with plastic wrap, and set aside in a warm place for 1 to 1 1/2 hours, until it has practically doubled in size.

To make the filling, in a small bowl, whisk the cinnamon and sugar to combine. Set aside.

If the dough feels too sticky to work with, lightly flour the counter before turning the dough out onto it. With a rolling pin or your hands, form a rectangle roughly 9-in-by-12-in. Generously brush the dough with the melted butter (you will have some left over). Evenly sprinkle with the cinnamon-sugar mixture, patting down the mixture with your fingers to make sure it adheres.

Tightly roll the dough up from the short side, forming a nine-inch roll, and place seam side down in the prepared pan, tucking the ends under.

Loosely cover the pan with plastic wrap and set aside in a warm place for about an hour, or until the bread rises to about 1 1/2 times its original size.

Preheat the oven to 375-degrees F.

Brush with the remaining butter and bake until nicely browned, 40 to 45 minutes. The bread is done when its internal temperature is 200-degrees F and/or it sounds hollow when you tap on it.

Transfer the pan to a wire rack and brush the top with the last of the melted butter. Let cool until the pan is easy to handle, remove the loaf, and let cool, right-side up, on a wire rack. Serve warm with melted butter. The bread is best the day it is made, but can be stored, tightly wrapped in plastic wrap, on the counter for up to three days. Toasting the day-old bread is awfully nice too.