It was one of those moments beyond logic … or control. The title of Alison Larkin’s wonderful, best-selling novel is The English American. At its very mention, in the recesses of the mind, where one’s personal “Spotify” play list lies in wait, the mention of the title evoked the plaintive lyrics of Sting’s An Englishman in New York. Without warning, the song appeared on the imaginary turntable of the memory.

“Modesty, propriety can lead to notoriety…

At night a candle’s brighter than the sun.”

And, now you have met Alison Larkin.

Her creative career has spanned continents and crossed oceans. Her stand-up comedy routine has enthralled audiences from the Comedy Store in Los Angeles to New York’s Comic Strip to London’s Soho Theatre. She is an actor, a playwright, a keynote speaker, a recording artist. She is, what critic Clive Davies pronounced in The Times “… marvelously light-footed.” 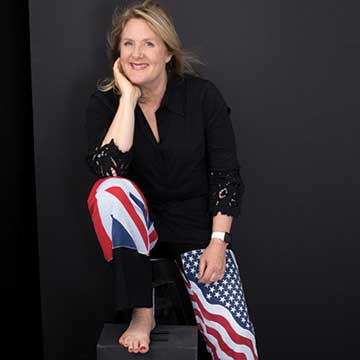 As fictionalized in her widely acclaimed novel, her comedic presence was inspired by the opportunity to meet her American birth mother who was living in Bald Mountain, TN. Born in Washington, DC, Alison had been adopted by British parents and grew up in England and Africa. But, Bald Mountain? There had to be some great lines in that encounter, and so there were. Alison, who had been classically trained in the theater and enjoyed success as both playwright and actor in England, moved to New York, added stand-up comedy to her portfolio, and charmed her audiences.

Her acting career has found her off-Broadway with The Royal Shakespeare Company and on Broadway with the Royal National Theatre. Alison was trained in the classical acting tradition at Webber Douglas Academy of Dramatic Art in London where her career as a leading lady began.

It doesn’t stop there, however. The swirling list of credits accumulated through Alison’s career include feature films and creating the voices for television shows. She’s attracted the attention of such directing giants as James Cameron, Robert Altman and the Coen Brothers. A woman with a delightful British lilt to her voice transformed into a Minnesotan for Fargo?

The response is too easy to pass up. “You betcha!”

For as many audiences and critics who have marveled at Larkin’s on stage presence, it is her seemingly boundless voice talent that has emerged as the key to her continued success. “I’m a great mimic,” she professes – not with braggadocio but honest appraisal of a very, very unique talent. There are many professional actors who believe they have the right ear, the right tonal inflections, and the right speech patterns to be great mimics. Some come close. Many fail miserably. Alison Larkin nails it.

Her work has included voice overs for animated films and television including the PBS cartoon series Pauline’s Perilous Pyramid and the Cartoon Network’s Mike, Lu and Og.

It has been, however, the world of audio books that has propelled Alison Larkin into a career much celebrated … a career that continues to radiate from the modest confines of her Berkshire Hills recording studio. She has become, to re-frame Sting’s line, celebrated as “an Englishwoman in New England.”

With her great love of British literature and the innate capacity to move between characters within a seamless narration, changing voices, interpreting lines, evoking humor and pathos, Alison has found her niche … she has gone “narrow and deep” into the creation of audio books.

The COVID-19 pandemic has changed many behaviors, not the least of which is amplifying the ways in which people are entertained, learn, discover … and dream. “It may be that I’m just homesick for England,” confides Larkin, “but reading the classics – Jane Austen, Lewis Carroll, Agatha Christie – brings wonderful literature into our lives and makes it relevant.”

Her work has not gone unnoticed. With well over 150 audiobook titles to her credit, many of them New York Times Best Sellers, she is a voice to be reckoned with. And, from her compact studio in the Berkshires, she has been able to attract other celebrate actors to become part of the productions of her own “audio imprint,” Alison Larkin Presents.

James Warwick, whose career spans the first stage production of The Rocky Horror Picture Show in London’s West End to starring on Broadway in An Ideal Husband to appearing in prime time network television shows is the voice in Alison’s production of Oscar Wilde’s The Picture of Dorian Gray. He has contributed several readings for the collection as well as a deeply personal discussion that is included with the “…Dorian Gray” audiobook.

A brilliant actor, known to local audiences for his portrayals of a wide variety of Shakespearean roles, Nigel Gore is the featured voice on Alison’s production of H. G. Wells prophetic novel The Time Machine. Most recently, another towering figure from Shakespeare & Company, Tina Packer, has offered her Tales From Shakespeare in an audiobook that retells the classic stories in a fresh, contemporary manner.

The bulk of her audiobook offerings, however, feature the talent of Alison, herself. Her presentations of the entire collection of Jane Austen classics – Emma, Pride and Prejudice, Sense and Sensibility, etc. – is now available. 81 hours of lyrical reading of books that have been celebrated for 200 years.

A champion for literacy

It was Alison’s keen interest in Jane Austen that led her to become engaged with the Jane Austen Literacy Foundation. The Foundation has worldwide reach, and in September hosted a writing competition with first prize including an audiobook reading of the winner’s submission by none other than Alison Larkin. The Winner by Cathryn Goddard was crowned the best of over 220 submissions to the contest and will get the full Alison Larkin Presents treatment.

So complete is her dedication to the cause of literacy, that Jane Austen audiobooks purchased through Larkin’s website trigger a donation to the Foundation.

A gathering of literacy giants

Larkin’s repertoire does not stop with Austen. Lewis Carroll, Agatha Christie, J.M. Barrie, Charles Dickens, Rudyard Kipling. The list goes on, and so do the offerings from Alison Larkin.

The resurgence of an already active audiobook market has been spurred by the ease of accessibility to the great stories and the capacity to share them with friends and family. Larkin’s website includes the exhaustive list of titles she has produced and offers links to the outlets that offer her collection to the public.

Sting’s plaintive song ends with a recurring line. “Be yourself, no matter what they say.” Alison Larkin has fully embraced the notion of being herself and, with understandable candor, has likely never had to wonder “what they say.” Her speaking says it all and invites a worldwide audience to listen. •

Alisonlarkinpresents.com is the gateway to the array of projects and, most importantly, audiobooks that she has created and produced. In addition, audible.com presents the entire array of available titles.