Live From Music Mountain in Falls Village, CT, will present acclaimed pianist Fei-Fei performing works by Schumann, Chopin, Rachmaninoff and Ennio Morricone as part of a weekly program of conversation and music that continues to explore the work of artists during the time of Covid-19. Fei-Fei, who was showcased prominently as a Cliburn finalist in the documentary film, Virtuosity, about the 2013 Cliburn Competition, which premiered on PBS in August 2015 is a winner of the Concert Artists Guild Competition has offered riveting performances at Music Mountain since 2017. 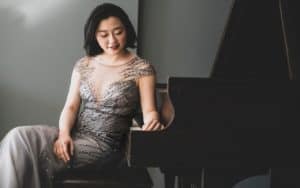 Highlights include performances with the Baden-Baden Philharmonic touring in Germany, a tour of Spain with the New York Youth Symphony, as well as concerto engagements with the Costa Rica National Symphony Orchestra, Columbus Symphony, Big Springs Symphony and Symphony in C. This season also brought a new special project titled The Inner Voices with violist Dana Kelley and clarinetist Yoonah Kim, featuring the music of Mozart, Schumann and Brahms.

During the pandemic, Fei-Fei has continued to share her “bountiful gifts and passionate immersion into the music she touches” (The Plain Dealer) via live streams and various recordings from her home in New York City. Fei-Fei’s upcoming performance highlights Music Mountain’s mission of the performance and teaching of  string quartet literature. While this mission remains vibrant in Music Mountain’s world-class Chamber Music Concert Series and Music Mountain Academy, it has expanded over the years with the addition of its popular Twilight Jazz Concert Series and new education and community programs.

Live From Music Mountain starts at 3 pm ET on Sunday, August 9, 2020, at musicmountain.org, on YouTube and on Facebook Live. Questions can be submitted in advance via email to info@musicmountain.org.