The Dos and Don’ts of the Mediterranean diet

According to quite a few doctors and cardiologists that I’ve spoken with, when it comes to a “diet” (and that’s not ‘diet’ as in you’re reducing the caloric intake and exercising to lose weight, but rather ‘diet’ as in how and what you eat) they all say that the best one for long-term health is the Mediterranean diet.

The Mediterranean diet obviously derives from countries around the Mediterranean Sea, and it is based on the eating habits of the people who live in that region. These eating habits are certainly very much intertwined with the cultures of Italy, France, Spain, Greece, Turkey, Israel, Lebanon, Syria, Egypt, Morocco, Tunisia, and more. So just consider all of the cultures and fresh ingredients and spices from thousands of years worth of cooking that have culminated in pure deliciousness – and health!

There are obviously countless books with so many recipes. But the one common thread that I have found is the freshness of the ingredients, the emphasis on fish and beans, as well as fruits and vegetables, seeds and nuts. So in my ever-searching quest for knowledge and health, my latest cookbook experience has been flipping through the pages of “The Mediterranean Method” by Steven Masley, MD. One of the sections in the beginning of the book that stuck out to me, and one that I’d like to share pertains to the dos and don’ts – or as Dr. Masley puts it “Before you begin (what NOT to do). And the headlines below are direct quotes from the book:

Mistake #1. Ignoring portion control (you can eat too much “healthy” food)

I feel that this is very much a common sense point, because we can over-eat good foods just like bad foods. Calories are calories, and even though you intake 2000 calories of good and healthy foods, it is still 2000 calories.

Mistake #2. Overdoing grains and cereals (including bread and pasta)

The main argument here is that we’re not moving enough to justify us eating large portions of grains and cereals. So the more you move, the more pasta you can have. Makes sense.

According to the book, eating seafood only a few times a month isn’t enough to get all of the health benefits. 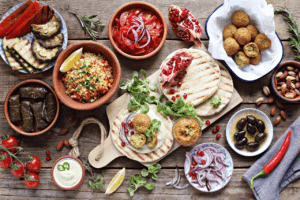 Mistake #4. Thinking that all cheeses (and yogurts) are created equal

No elaboration needed on that one!

So beans are actually a “fiber-packed superfood” and according to Dr. Masley most people don’t eat enough of them, for various reasons, and therefore miss out on all of the major health benefits.

We all know what this is in reference to! Refined carbohydrates and certain fats are not good for us, as are many fake sugars and chemicals. Essentially, we need to eat “real” food!

Mistake #7. Drinking too much wine (and not enough water)

Yeah, we need to watch that wine intake, huh? And water is our friend! There’s no such thing as drinking too much water.

I didn’t know this but when extra-virgin olive oil reaches 400 degrees Fahrenheit, it breaks down. So it is not meant to be used with high-heat, or even medium heat.

This point is essentially reminding us to not limit ourselves and just stick to flavors that we know, like those from Western Europe for example, but to also be open to the flavors and influences from Northern Africa and the Middle Eastern regions.

With this all said, who’s ready to examine some fun Mediterranean cookbooks and experience some familiar and some new flavors?