Week 4 and 5: A little bit of good and quite a few carbs

Week 4, last week, started off all right, but became a mixed bag. Somehow it became “carb week” – and boy did I feel a difference in my gut. But let me begin by saying that I was reunited with the one and only Masha – the pilates guru of Millerton. I’ve worked with Masha on and off for the past four years, and last week we had two workouts together. Masha began by checking on me, how things are, what’s what, and then got me on the pilates machines and started testing my body. Flexibility. Endurance. Elasticity.

After the first day’s workout, my body felt really great and activated. We stretched everything, and that felt fantastic on my back in particular (especially with my ongoing back problems). That night I did feel it a bit though, and when I woke up the next morning I was a tad stiff, especially on my right side. But we did back-to-back workouts, and I was back the next day where we continued with Masha’s plan. I felt pretty good in that session too, continuing to activate different parts of my body and having my muscles work. But I’ll admit that the next day and the day after that, my body was a bit tired and stiff. I guess that tells me it’s time to do this more consistently, huh?

Now to the carbs: last week, for whatever reason, was a rather carb-heavy week for me. I’m usually fairly good about watching my carb intake, but when it came to dinner meal times last week … tired and bored were the names of the game. When it was time for dinner, my husband and I were just too tired to cook and bored with the same-old-same-old, and so we ended up eating out a couple of nights. We don’t go crazy, but it was a bit more carbs than the prior weeks of my diet. This seemed to last all week, and I felt a big difference as a result: my gut no longer felt light and I felt a little sluggish.

But now we’re in week 5 and yesterday, Monday, was filled with salads and light eating … up until after dinner when I had a hankering for the Tate’s cookies that have been staring at me in the pantry for the past two weeks. Soooo.. I indulged in a few with some milk, and it made me feel great when I was eating them, but it made me feel like “blah” later on and the next morning. So it’s back to more conscious eating (now that we’re over the bored-and-tired eating week) while working with Masha, too.

I’ve found that it’s all about taking the right steps, the baby steps, in the right direction: always inching towards the right and healthy way, and making that your new normal. We can’t expect change to happen overnight, but you will see and feel that change if you take the necessary steps. That’s what I keep reminding myself of and working towards at least. And so tomorrow there will be more healthy salad and nutrients in my future, along with another great session 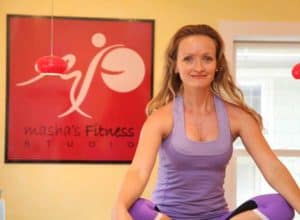 In week 6 I’m planning on getting back to yoga as well – this is my really busy week at work and I’m utterly swamped, so the yoga schedule isn’t conducive to my work schedule this week. I’ve also found that having a noon session with Masha is very effective: it breaks up my day, gets me up for a while, and I’m not really hungry for lunch. Additionally, I look forward to getting back into the proper eating routine, and getting rid of this heavy, bloated, carb feeling.

Upward and onward, my friends!